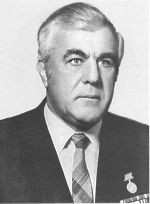 Born into a working class family. After graduating from high school, he entered the Geography Faculty of Leningrad University, from which he graduated in 1937. From 1938 to 1941 he worked at the Arctic Research Institute. In 1941 he defended his Ph.D. thesis on the topic: "Non-periodic fluctuations in the water level in the shallow areas of the Arctic seas." During the Great Patriotic War, he was in the ranks of the Red Banner Baltic Fleet, participated in battles on the Leningrad Front. He developed methods of stereophotogrammetric artillery reconnaissance and determination of the planned location and depth of installation of minefields at sea, which were effectively used during the defense of Leningrad. From 1946 to 1951 was the head of the Main Naval Observatory of the Naval Forces, and from 1951 to 1953. - Deputy Head of the Institute of Naval Forces. In 1953 he defended his doctoral dissertation on the topic: "Currents of the Baltic Sea". From 1953 to 1994 worked continuously at the Institute of Oceanology.

He began his scientific career in 1937 by studying the Arctic seas. He carried out extensive studies of the regime of non-periodic level fluctuations and currents along the Northern Sea Route.

In 1947-1949, under his leadership, five expeditions to the Baltic Sea were carried out, according to their results, the Synoptic Atlas of the Baltic Sea Currents was developed and published for the first time in oceanographic literature. In 1950-1951, based on the results of research in the Barents, Norwegian and Greenland Seas, a number of atlases and navigational aids for the fleet were published.

In 1953 he transferred to the USSR Academy of Sciences and became the director of the Institute of Oceanology. Under his leadership, the Institute grew from a small team into a large, leading oceanological institution of the country, conducting extensive research in the World Ocean.

With his direct participation in 1956-1959, the first Soviet marine research in Antarctica was carried out. Research on water and heat exchange of the Southern Ocean with other oceans is of particular interest. A series of works published in 1960-1963 on these studies shows the exceptional role of the Southern Ocean in the formation of the regime of the waters of the World Ocean as a whole, as well as the influence of the Southern Ocean on the climate and atmospheric processes in the Southern Hemisphere. Under his leadership, more than 60 maps and charts have been compiled, highlighting the hydrology and dynamics of the Southern Ocean. These materials became the basis of the marine part of the Soviet Atlas of Antarctica.

He is one of the organizers of the first Soviet large-scale oceanic experiment in 1970, which ended with the discovery of energy-carrying vortex movements in the ocean, registered by the State Committee for Inventions and Discoveries (1978).

In 1977-1978, the POLIMODE Interdepartmental Expedition under his leadership carried out long-term continuous studies of the dynamics of ocean eddies at a large-scale hydrophysical test site (more than 300,000 km2) in the southwestern part of the North Atlantic. The research carried out was unique for the world oceanological science.

Being the head of one of the leading problems developed by the Institute of Oceanology - "Hydrology of the World Ocean", for many years he supervised the preparation of a 10-volume monograph "The Pacific Ocean". This outstanding work, summarizing current knowledge of the nature and resources of the greatest of the oceans, is an important contribution to world science. For the monograph "The Pacific Ocean" he and his co-authors were awarded the State Prize (1977).

He was the organizer and leader of 23 major scientific expeditions. He was actively involved in scientific and organizational activities. Since 1955, Chairman of the Oceanography Section of the Interdepartmental Geophysical Committee, he organized and directed Soviet oceanographic research under the program of the International Geophysical Year. Repeatedly represented the interests of the country at various international meetings and conferences. Since 1957 he has been elected to leading positions in many international oceanographic and geophysical organizations.

He has published 150 scientific works, including 4 monographs.

For his great contribution to the development of oceanological science and active scientific and organizational activity in 1973 he was awarded the honorary title "Honored Scientist of the RSFSR".