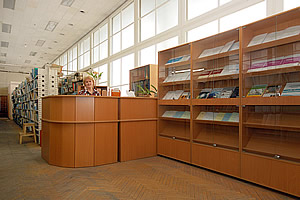 The history of the scientific library of the Institute of Oceanology of the Russian Academy of Sciences began in 1946. The founder and organizer of this unique library fund can rightfully be called Zinaida Alexandrovna Leikina, who worked at the Institute of Oceanology since April 8, 1947 as a library manager. Over the years of her work, she, mainly on her own, collected a valuable scientific library (more than 70,000 units) of storage, many generations of scientific personnel of the Institute have grown up on which.

Theodore Saulovich Russ - a famous scientist, professor, doctor of biological sciences, ichthyologist, who studied the processes of reproduction and development of marine fishes of the Far East and the World Ocean made a great contribution to the creation of the library's fund.

As a permanent Chairman of the Library Council of the Institute of Oceanology, he filled the library with a scientific foundation brought from Germany (including works describing such famous expeditions as "Challenger", "Deutsche Antarcht Expedition", "Deutsche Sudpolar Expedition", "Meteor" and many others). The unique ichthyological library of studies, works and books collected by the scientist was subsequently transferred by his heirs to the laboratory of the oceanic ichthyofauna of the Institute of Oceanology of the Russian Academy of Sciences. Thanks to the efforts of Theodor Saulovich Rass, the IO RAS library has become a valuable source of scientific knowledge in ichthyology and oceanology.

The fund includes domestic and foreign literature on the physics of the sea, oceanology, geochemistry and geophysics of the sea, geomorphology and tectonics of the seabed, hydrobiology, hydrogeology, ichthyology and related disciplines, as well as works devoted to the study of the flora and fauna of the oceans and seas of our planet, and hunting for marine animals, legal and technical aspects of ocean studies. Through the BEN RAS, the library is linked to the university libraries of Germany and Sweden and can receive literature from them (electronic copies of materials on the application at the BEN RAS).

Among periodicals the most popular are such journals as "Oceanology", "Hydrobiological Journal", "Pacific Geology", "Marine Collection", "Marine Hydrophysical Journal", "Meteorology and Hydrology", "Physics of the Atmosphere and Ocean", "Underwater Research and robotics",  "Optics of the atmosphere and the ocean", "Fundamental and applied hydrophysics", "Water resources", "Sea biology", "Ichthyology questions".

The library provides subscription services for readers, a selection of scientific literature and copying and duplicating work for the Institute's staff, a permanent reconciliation of the books available in the library fund with catalogs. The systematization of books by domestic and foreign authors, the maintenance and editing of alphabetic, systematic and regional catalogs are carried out highly. The exhibition of new receipts of magazines and books is held weekly. The collection of the fund of the Institute of Oceanology is carried out every week through the central library of the RAS, as well as through donations from scientists and staff of the Institute. Only members of the Institute of Oceanology have the right to use the library's subscription. Employees of other institutions are served in the reading room.

Contact telephone: (499)124-63-56
E-mail address: This email address is being protected from spambots. You need JavaScript enabled to view it.