News from the research vessel "Deneb": the discovery of the predatory comb jelly Beroe ovata in the Caspian Sea.

On November 9, 2020, during a joint scientific expedition in the Caspian Sea, in which the employees of the Caspian branch of the IO RAS (director of the branch, PhD (Biological Sciences) V.B. Ushivtsev) and the Southern Scientific Center of the Russian Academy of Sciences (head of the expedition, PhD (Biological Sciences E.P. Oleinikov), in the area of Makhachkala, the comb jelly Beroe ovata was first discovered in its natural environment.

This species of predatory comb jelly feeds on another species of comb jelly (mnemiopsis) and is widespread in the Atlantic Ocean and the Mediterranean Sea. Earlier, Beroe ovata was introduced to the Black and Azov Seas, which helped to restore the biological productivity of marine ecosystems after the expansion of Mnemiopsis. 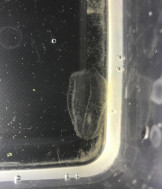 In a water sample taken on November 9 to study the state of the population of the ctenophore mnemiopsis (Mnemiopsis leidyi), many zooplankton and 12 specimens of the ctenophore Beroe ovata were found. Mnemiopsis was not found in the sample. The next 5 tests showed a similar picture. The appearance in the Caspian Sea of the comb jelly Beroe ovata, a natural enemy of the zooplanktophage Mnemiopsis leidyi, is a very positive event for the restoration of the sea's biological productivity.

The research is continued.