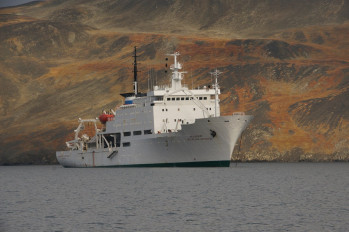 The results obtained during the expedition are necessary for predicting the processes of permafrost melting, as well as for assessing the ecological state of waters in the seas of the Eastern Arctic.

The World Ocean Research Program is part of the national Science project and provides for marine expeditions. In the expedition of the research vessel "Academician Mstislav Keldysh", organized by Shirshov Institute of Oceanology of RAS together with V. I. Ilyichev Pacific Oceanological Institute FEB of RAS, scientists and students from 12 scientific organizations took part, including Tomsk Polytechnic University, Moscow Institute of Physics and Technology, M. Lomonosov Moscow State University, A. Vinogradsky Institute of Microbiology RAS, V. I. Vernadsky Institute of Geochemistry and Analytical Chemistry of RAS, and the National Scientific Center for Marine Biology FEB RAS.

For the first time, scientists from the Northern (Arctic) Federal University, the Skolkovo Institute of Science and Technology, the First and Third Oceanographic Institutes of the Ministry of Nature of China took part in a comprehensive expedition to the seas of the Eastern Arctic. In addition, scientists from Sweden, Norway, the Netherlands, Italy, Great Britain and the USA participated in the preparation of the expedition along with Russian researchers. In total, 65 researchers were involved in the voyage, most of which were young scientists (80%), of which 24 were undergraduate and graduate students.

The Minister of Science and Higher Education of the Russian Federation Mikhail Kotyukov said that for 2019 the Ministry of Education and Science of Russia is planning to conduct more than 30 sea expeditions in the Arctic, Far Eastern, Black and Azov Seas. The expedition RV “Akademik Mstislav Keldysh” will be the 27th successfully completed. The Russian research fleet will have to carry out 238 scientific expeditions by 2024.

The 78th voyage of the RV “Akademik Mstislav Keldysh” began on September 17, 2019 and takes place in two stages. The first stage of the complex expedition was carried out in the seas of the Eastern Arctic - the East Siberian Sea and the Laptev Sea, as well as in the Kara Sea.

The studies conducted as part of the expedition were aimed at solving a number of tasks of the “Strategy for the scientific and technological development of the Russian Federation”. First of all, it is a study of the state of permafrost, the ecological state of water and bottom sediments along the Northern Sea Route, the flow of greenhouse gases and other components of the carbon cycle in the Arctic land-shelf-atmosphere system. Scientists note that more than 80% of all permafrost is located in the seas of the eastern Arctic - on the widest and shallow shelf of the World ocean.

Igor Semiletov noted that during the expedition in the Eastern Arctic seas region, thousands of kilometers away from the main sources of anthropogenic pollution, an accumulation of various types of microplastics, one of the most dangerous pollutants for living organisms, was first discovered and quantitatively studied.

The head of the geological direction of Shirshov Institute of Oceanology of RAS, Corresponding Member of the Russian Academy of Sciences Leopold Lobkovsky said that in September this year, the scientists of the Institute of Oceanology at the RV “Akademik Mstislav Keldysh” for the first time mounted an installation for capturing and recording plastic microparticles using the flow method. The data obtained with its help, after a detailed study in laboratory conditions, will allow us to draw conclusions about the pattern of microplastic distribution in the waters of the seas passed. In addition, during the voyage, the first results of applying the technology of self-floating bottom stations established as part of a pilot project in the area of ??the Gakkel ridge were obtained.