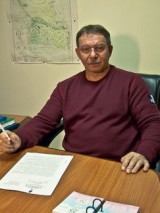 Ushivtsev Vladimir Borisovich was born in Astrakhan. His scientific work began at the Caspian Research Institute of Fisheries, where he began to work as a laboratory assistant after graduating from the Astrakhan State Technical University and obtaining the specialty of an ichthyologist.

For 29 years of work in CaspNIRKh he defended his thesis for a candidate, passed the labor path to the head of the underwater research laboratory. Annually he took part in scientific marine expeditions to the Caspian and Black Seas (from 2000 to 2005) as the head of a group of underwater research. In 1998 he worked in the Caspian sea together with the French expedition of the Cousteau team.

In 1998, he took part in the International Conference of Astrocologists in Agssburg (Germany). In 2005, in accordance with the program "Open World" he was invited to California (USA) to get acquainted with the experience of working on solving environmental problems by US scientists. In 2004, he was awarded the title of laureate of the Governor of Astrakhan region for the development of the method of biological control of alien invasive species (ctenophore Mnemiopsis).

It is the only specialist in Astrakhan for underwater video. He prepared several video films about the nature of the Volga-Caspian: "The Eastern Caspian" (1993), "Riddles of the Caspian seal" (1994), "On the Verge" (on environmental problems of the Volga-Akhtuba floodplain, 1995), "River crayfish of the Volga-Caspian" (1996)," From far away the river flows ... " (1997), "Adventures of the Cousteau team in Russia "(1998)," Strangers" (about the invasive ctenophore Mnemiopsis, harming the ecosystem of the Caspian, 2000. ), "The ecosystem of the Volga-Caspian region at the beginning of the III-rd millennium" (2004). These films were repeatedly broadcast on local television.

In 2004, he was appointed to the post of head of the Caspian branch of Shirshov Institute of Oceanology of the  Russian Academy of Sciences. At the present time V.B.Ushivtsev develops and participates in the implementation of environmental programs to conserve the ecosystem of the Caspian Sea in the conditions of offshore oil production.

He published 42 printed works, he also has publications in World editions. Has 3 copyright certificates for inventions.