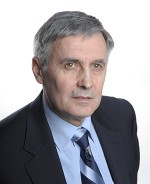 Oceanologist, PhD (Physical and Mathematical Sciences) (1979), Head of the Center for coordination of ocean research.

In 1971 he graduated from the Department of Oceanology, Faculty of Geography, Lomonosov Moscow State University and after serving in the Soviet army in 1973 entered the full-time graduate school of the Institute of Oceanology.

After graduating from graduate school from 1976 to 1988 he worked as an employee of the Laboratory of hydrological processes of IOAS. At the end of 1988, he joined the Commission of the USSR Academy of Sciences on the problems of the oceans, where he worked as the scientific secretary of the Commission until 1998. From 1998 to the present, he has been the head of the Scientific Coordination Oceanological Center of the Russian Academy of Sciences at Shirshov Institute of Oceanology of RAS.

He participated in 20 marine scientific expeditions.

He is the author of more than 70 works in the domestic and foreign press, the editor-in-chief of the monograph “Fundamental Studies of Oceans and Seas”.

He leads a lot of scientific coordination work. For many years he has been the scientific secretary of the Scientific Council of RAS on oceans. S.M.Shapovalov is Executive Secretary of the National Russian Committee of the SCOR and is currently a member of the SCOR nominated members from Russia. In 2003, with his active organizational participation, a meeting of this authoritative international organization took place in Moscow. This was the first time in nearly 50 years of SCOR's existence.

For several years S.M.Shapovalov was a member of the Board of Directors of the PACON-International. Thanks to his perseverance and organizational skills, a scientific conference of this Congress was held in 1999 in Moscow.

He is also a member of the Interdepartmental National Oceanographic Commission under the Ministry of Education and Science of the Russian Federation. He is actively working on the organization, maintenance and coordination of a number of state and departmental programs aimed at exploring the oceans. He took an active part in the formation of the Federal Target Program “The World Ocean” and the coordination of work on its implementation from 1997 to the present.