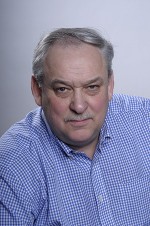 In 1972 he graduated from the Department of Hydrobiology of the Biological Faculty of Moscow State University, which was headed by V.G. Bogorov. He came to the Institute of Oceanology in 1970 before graduating from Moscow State University; he was preparing a thesis on zooplankton of the tropical zone of the ocean based on the materials of expeditions of the Academy of Sciences.

In 1981, he defended his thesis on structural features of plankton communities of highly productive areas of the ocean, in 2005 - a doctoral thesis on the role of shelf fronts in the formation of biological productivity.

Scientific interests are related to the study of the structure and productivity of the pelagic ecosystems of the seas and the ocean and their variability under the influence of climate and anthropogenic stress.

Member of 14 major marine expeditions on the ships of IO RAS and foreign scientific institutions in the Pacific, Indian and Southern Oceans, Black, Mediterranean and Bering Seas. In a number of expeditions he was the head of scientific programs.

Work in the area of ??the eastern boundary currents of the Pacific Ocean and the Subantarctic (1974–1989) provided new insights into the influence of hydrophysical fronts of the open ocean and the continental slope area on the structure of plankton communities, as well as revealing the patterns of quantitative distribution of mesoplankton in coastal upwelling areas.

In studies conducted in the Eastern Pacific and the Arabian Sea, fundamental ideas about the relationship of the plankton distribution with the conditions of deep oxygen deficiency in the global oxygen minimum of the ocean were obtained and the physiological characteristics of mass species were determined, which determine their different resistance to low oxygen concentrations in the environment.

In 1985–1986 organizes expeditions to the Black Sea, aimed at studying processes in the area of contact between oxygen and hydrogen sulfide zones, in which the Argus underwater manned vehicle is used for observation and targeted sampling. As a result, information was obtained on the fine vertical structure of pelagic communities in the lower part of the aerobic layer, which determine the possibility of involving the production of chemosynthesis in pelagic trophic networks (together with M.E. Vinogradov).

In 1992-1995 leads the Russian-American Regional Bio-Oceanology Project in the Bering Sea. The result of these studies was original work revealing the mechanisms of influence of shelf hydrophysical fronts of various types on the productivity of pelagic ecosystems.

He is engaged in the development of new methods of field bio-oceanological research. Created by him together with M.V. Heptner and A.G. Timonin electronic closure of planktonic networks made it possible to obtain fundamentally new data on the fine vertical structure of planktonic communities in the surface layer of the ocean and the mesopelagic and its relation to the physical and chemical environmental conditions.

Member of the editorial boards of the journals "Oceanology" and "Biology of Inland Waters", member of the international working groups for the study of marine ecosystems of the Arctic and the Bering Sea.

The author of more than 120 scientific papers.