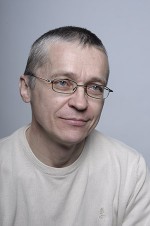 Geologist, DSc on Geological and Mineralogical Sciences (2008), Chief Researcher, Head of the Laboratory of paleoecology and biostratigraphy, Shirshov Institute of Oceanology of Russian Academy of Sciences.

In 1983, he graduated with honors from the Chairt of General physical geography and paleogeography of the Geographical faculty of the Lomonosov Moscow State University, with a diploma in the late Quaternary history of the sea of Okhotsk based on data from diatom analysis.

In 1992, he defended his PhD Thesis on "paleoecology of radiolarians and Quaternary paleooceanology of the North Atlantic".

In 2007. he defended his DSc Thesis on "Quaternary biostratigraphy and paleooceanology of the sea of Okhotsk and other subarctic regions".

1985–1986, engineer at Center for Hydrology and Meteorology of USSR, and at Geography Dept. of M.V. Lomonosov Moscow State University, Moscow, Russia.

Since 1986, he has been working at the Shirshov Institute of Oceanology of Russian Academy of Sciences.

In 1992 he was approved as a Researcher.

Since 2005, he has been acting Head of the laboratory.

The main directions of scientific work in the last few years are processing, updating and computer analysis using the method of factor analysis and spline interpolation (in collaboration with doctor of physics and mathematics I.G. Yushina) of the database on the current distribution of radiolariums for obtaining paleooceanological reconstructions; study of the Quaternary fauna of the sea of Okhotsk radiolarians for the development of detailed biostratigraphy and paleooceanology of this basin in the framework of the international COMECH and IMAGES projects in collaboration with German colleagues, as well as as part of the COMECH paleooceanological subproject led by Professor M.S. Barash.

As one of the main performers, he participates in scientific projects: under grants from the international Soros Science Foundation; in the framework of SSTP "Biological diversity", SSTP "Integrated research of oceans and seas, Arctic and Antarctic"; under grants from the Russian Foundation for basic research; in the Russian-German projects " Variability of the Biosphere in Northern Eurasia "(Changes in the biosphere of Northern Eurasia) and KOMEH (the Kurile-Okhotsk Marine Experiment – Integrated research of the sea of Okhotsk); in the international project IMAGES (The International Marine Past Global Changes Study – International studies of Quaternary global changes in the World ocean).

At the invitation of German colleagues, he works in Germany in research centers - at the A. Wegener Institute for polar and marine research in Bremerhaven and GEOMAR in Kiel.

He reported on the results of his scientific work at many national and international scientific meetings and seminars, participated in a number of expeditions on research vessels in the North, Baltic and Okhotsk seas.

Matul A. and Mohan R. Distribution of Polycystine Radiolarians in Bottom Surface Sediments and Its Relation to Summer Sea Temperature in the High-Latitude North Atlantic // Frontiers in Marine Science. 2017. V. 4:330. doi: 10.3389/fmars.2017.00330.