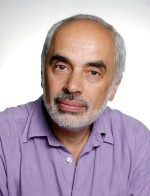 PhD on technical sciences, Leading Researcher, Head of the Laboratory of Underwater Video Equipment of Shirshov Institute of Oceanology of RAS.

1973 – He graduated from the Chair of Industrial Automation of the Moscow Energy Institute with a Degree in Electrical Engineering.

1975 – 1980, he studied on the Postgraduate School of the Shirshov Institute of Oceanology.

1981 – He defended his PhD on technical Sciences.

Until 1994, he worked in industrial research institutes and design bureaus. At the same time, from 1975 to 1980, he studied at the correspondence postgraduate school of the IO RAS and in 1981 defended his PhD Thesis on "a Microprocessor system for measuring hydrophysical parameters of water". The scientific supervisor of this work was Professor L.L. Utyakov.

Since 1994, he has been working at the IO RAS in the Laboratory of microprocessor systems, and since 2002-Head of the newly created laboratory of underwater video equipment.

He is a Leading Specialist in the field of control systems for underwater remote-controlled vehicles and systems for measuring, collecting and transmitting data, as well as underwater telecommunications.

He developed a number of underwater instruments, including a unique underwater measuring station based on an acoustic-optical spectrum analyzer with real-time data transmission via a buoy radio channel, which was successfully tested in the coastal waters of Kamchatka.  He is the developer of a series of the world's smallest underwater remote-controlled devices "GNOME", awarded a gold medal at the world exhibition of inventions "EUREKA-2000" (Brussels).  He takes an active part in many coastal and marine expeditions under the programs of the Russian Academy of Sciences, the Ministry of Emergency Situations, and other departments and organizations. Currently, it continues to develop new modifications of the GNOM spacecraft and technologies for underwater research and search and inspection operations using them.

He has more than 40 published works, as well as author's certificates and patents for inventions.