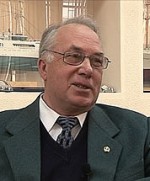 One of the leading Soviet scientists in the field of physical oceanography and the interaction of the ocean and the atmosphere.

In the early 60s, he investigated variations in the velocities of currents in the open ocean based on the ABS and their relationship with synoptic variations in atmospheric pressure. In the course of this analysis, the barotropic response of fluctuations in the velocities of sea currents during the passage of cyclones was revealed. Research in this direction was continued in the 70s in the Far East based on an analysis of level fluctuations in the Kuril Islands and in the northwestern part of the Pacific Ocean. 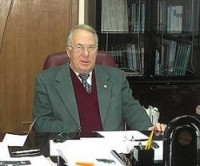 In the course of the research, a joint review of level coastal, remote cable, as well as autonomous field observations of bottom pressure variations carried out in the I and II Soviet-American tsunami expeditions was carried out. For the first time, the empirical transfer functions from meteorological factors to the open ocean level were estimated.

In the 1980s, he began researching the processes of interaction between the ocean and the atmosphere in order to clarify the role of the ocean in the formation of short-period climate fluctuations (the Razrezy program). With his participation and under his leadership, a quantitative description of heat transfer between the ocean and the atmosphere was carried out, with an emphasis on taking into account the phases of the annual course and characteristics of the underlying surface, which made it possible to identify the fundamental differences in the components of the climate system: oceans, land and glaciers in relation to the atmosphere. Based on the analysis of long-term time series, an empirical model of the regular seasonal variation and irregular components was built. For the first time, floating rates were introduced and a new approach was proposed that allows to divide the anomalies into "fast" (intraseasonal) and "slow" (interannual). Based on hydrometeorological information, the focal structure of ocean-atmosphere energy exchange was described and seasonal and climatic energy-active regions of the World Ocean were identified.

During the field monitoring of the Newfoundland energy-active area, the features of local synoptic and seasonal heat transfer were studied. A hot water source area was discovered, associated with a quasi-stationary anticyclonic eddy. Later it turned out that anticyclonic eddies are a common feature of mid-latitude energy-active regions, which made it possible to form the concept of their thermal monitoring. In the early 1980s, while studying the meridional transfer of heat and "fresh" waters in the World Ocean, he formulated a hypothesis about the existence of a global interoceanic circulation of waters between the Atlantic and Pacific oceans, called the natural heat engine of the O-kind, and it was shown that the North Atlantic is a global energy-active region World Ocean.

In the northern part of the Atlantic Ocean, two modes of meridional heat transport are distinguished, associated with the transfer of heat to the atmosphere and the transit of heat to high latitudes. In the course of a full-scale multi-vessel experiment ("Newfaeks-88"), the mechanism of intense local heating of the atmosphere above the subpolar front was discovered and described - an atmosphere that is unsteady in time and an ocean that is inhomogeneous in space.

Developing the idea of wave energy capture in the boundary regions of the frontal zones, a hydrodynamic model was built and frontally captured waves were detected.

Under his leadership, the program "The role of the ocean in climate fluctuations" (adopted by the IOC) was prepared, which is aimed at identifying the active role of the ocean, the dynamics of its deep waters as the oceanological foundations of long-term climatic processes.

Recently, his scientific interests have been associated with the study of oceanological factors governing long-term changes in atmospheric circulation and the development of a quantitative empirical model of ocean-atmosphere interaction. Since 1974 - head of the scientific school “The role of the ocean in climate fluctuations".

Participated in sea expeditions of the State Committee for Hydromet and the Russian Academy of Sciences, incl. during the 40th cruise of the R / V Vityaz - a dynamic training ground in the Arabian Sea.

He has served on many of the steering committees of the World Climate Program.

Member of the Intergovernmental Committee on the TOGA Program (1990), IOC Section on Oceanic Processions and Climate (1992), Scientific and Technical Committee on GOOS - Committee on Climate Change and the Ocean (1993), Member of the CCSS (1991-1993), Member of the Planning Committee WHP ( 1991-1993), coordinator of the Russian project of the WOCE program, head of the Seas of Russia, SSTP, Integrated Studies of the World Ocean, Arctic and Antarctic, Chairman of the Global Ocean Observing System working group under the RAS Commission on World Ocean Problems, member editorial boards of the journals "Oceanology", "Meteorology and Hydrology".

Vice President of SCOR - Scientific Committee for Ocean Research at UNESCO (1996-2000); national coordinator of the international WOCE program, member of JSC WMO / ICSU / IOC - Joint Scientific Committee of the World Climate Research Program (1997-2000). Since 1999 - Member of the Board of Directors of Oceanological Institutes of the World in the framework of the Global Ocean Observing System Partnership. Head of the NES Section - Scientific and Expert Council of the Marine Collegium under the Government of the Russian Federation. Deputy Chairman of the NOC - National Oceanographic Committee.

He was an encyclopedically educated man who deeply knew the nature of the ocean and climate, a man of amazing modesty and honesty, human kindness and intelligence. Since 1995, he headed the Department of Oceanology at Moscow State University. Keeping the traditions of the founder of the department N.N. Zubov, he taught students to love and understand the ocean, and the students loved and respected him very much.

Author of about 200 scientific papers, incl. 5 monographs. In 1991 he was awarded the Shokalsky Prize. 12 Ph.D. theses were defended under his supervision.

He was awarded many government awards, in recent years his work has been noted by the leadership of the Russian government.