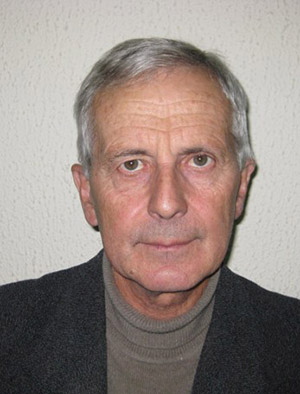 geophysicist, doctor of physico-mathematical Sciences (1986), chief researcher (1994), head of the group of synoptic processes of the Laboratory of the interaction of the ocean with terrestrial water and anthropogenic processes.

In 1964 he graduated from the Mechanics and mathematics faculty of T.G.Shevchenko Kyiv University on specialty "mechanics". In 1965 he entered the postgraduate school of the Institute of atmospheric physics of USSR Academy of Sciences, where he dealed with the theory of turbulence and its applications to the physics of the atmosphere and the ocean.

After finishing the graduate school in 1969 he was enrolled in the Department of computer engineering of the Institute of Oceanology, and then transferred to the Study of the theory of sea waves of the Theoretical physics Department.

In 1972 he defended his thesis on two-dimensional turbulence. It was modeled on a computer a flat turbulent flow with spectral law "minus three," the spectrum of the passive impurity "minus one" was predicted and confirmed by numerical calculations and the concept of quasi-geostrophic turbulence was developed that made it possible to explain the properties of large-scale dynamics of cyclones and anticyclones in the atmosphere and synoptic vortices in the ocean, and also a striped structure of Jupiter.

In 1986 he defended his doctoral thesis on "Dynamics and statistics of synoptic eddies in the ocean".

His main scientific achievements in the theory of two-dimensional turbulence for the field of a passive tracer: the spectral law "minus one" is obtained and the logarithmic corrections to this law eliminating the infrared divergence of the spectrum are calculated.

Lately he has been building a model of large-scale ocean circulation, taking into account the effects of ventilation and subduction of the main thermocline, as well as the development of spectral dynamic models, geodynamo on the Rossby waves spreadingin the liquid core of the Earth.

He is a scientific editor of the journals "Oceanology" and "Physics of the atmosphere and ocean" of the RAS.

He is the author of over 70 published scientific papers.