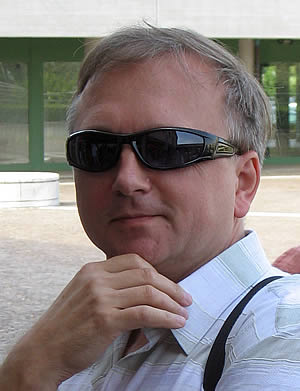 physicist, oceanologist, doctor of physical and mathematical Sciences (2000), chief researcher of the Laboratory of experimental physics of the ocean (2008).

In 1982 he graduated from Moscow Institute of physics and technology, faculty of Aerophysics and space research. His scientific internship was at the Institute of Oceanology, where in 1982 he started to work.

In 1987 he defended his candidate thesis and in 2000 – doctoral dissertation. In 1994, he received the academic title of senior researcher; since 1997 – leading researcher. In 1998 he received the title of visiting Professor at the University of Liege (Belgium).

He is a specialist in the field of physical oceanology, studies of ocean eddies, fronts and currents, and vortex coherent structures such as intra-thermocline vortices of different origin, systems of transverse jets in upwelling zones and mushroom-like currents.

In 1980 years he was engaged in the analysis of field observations of intra-thermocline vortices on all areas of the world ocean, laboratory experiments to study the dynamics and stability of ocean vortices, fronts and mushroom-like currents, as well as the analysis of satellite data.

In 1990 years special attention was paid to the study of mesoscale structure of coastal upwellings, vortices and systems of transverse jets from the North and the South-West coast of Africa, Sicily and the Black sea. On this topic in the 1994-2001 period it was carried out scientific cooperation with Liege University (Belgium), where he was the project Manager from the Russian side.

He did a great job for the systematization and description of oceanic fronts of the Norwegian, Greenland, Barents and Bering seas as well as the southern Indian ocean. He investigated the interannual variability of the thermal state of the waters of the Eastern Atlantic, Western Mediterranean, Black, Caspian and Aral seas.

From 1995 to 2001 he was the head of the International scientific-technical project "Upwelling" of the Ministry of industry and science of Russia, which performed in the framework of the intergovernmental Agreement on development of economic, industrial and scientific-technical cooperation between Russia and the Belgium-Luxembourg Economic Union (SSTC).

From 1999 to 2002 he was the scientific Secretary of the Section N6 "South seas" of the Federal target program "The world ocean" of theMinistry of industry and science of Russia.

In 2000-2002 he is the co-Director of two international projects on the study of the current state of the Aral sea.

He participated in five marine expeditions, including three on the research vessels of Italy, France and Brazil.

He is the author of 400 scientific publications, including 18 books.