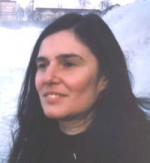 The main areas of research

The Great Conveyor Belt and the Laboratory of Paleoceanography study areas

The most important research results obtained in 2017-2020

More in this category: « V.P. Zenkovich laboratory of the sea shelf and coasts
back to top