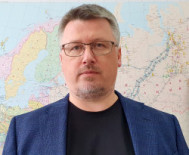 Kremenetsky has been working at Shirshov Institute of Oceanology of RAS since 2000 after graduating from the postgraduate study at the Physics Department of M.V. Lomonosov Moscow State University. In 2000 he defended his PhD thesis.

Since 2000, he took part in more than 30 scientific research cruises as a researcher, head of a detachment, head of a voyage in Russian and international expeditions in the Pacific, Arctic Oceans, in the Kara, Barents, White, North, Norwegian, Baltic, Black, Mediterranean, Okhotsk, Japanese, Dead, South China Seas and the Laptev Sea.

For many years Kremenetsky has been the executor of a number of federal, academic and international scientific topics and projects, as well as RFBR grants. Since 2013, he has been the organizer and leader of a number of applied projects in the interests of industry, mainly in charge of hydrometeorological and environmental works.

Kremenetsky has been a member of the Scientific Council of the IO RAS for more than 10 years, speaks and reads fluently in English, can explain himself in Spanish. For several years he has been giving lectures to third-year students of the Moscow Institute of Physics and Technology.