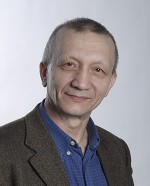 In 1972 he defended his PhD thesis on "Theory of boundary currents in the ocean", in 1987 - his doctoral thesis "Rossby waves and synoptic variability of the ocean".

His main scientific research is related to the theory of large-scale and synoptic movements in the ocean. He developed the theory of internal boundary currents, which describes the separation from the coast of intense jet currents (Gulf Stream, Kuroshio). He is one of the founders of the theory of two-dimensional solitary Rossby vortices, used, in addition to geophysical hydrodynamics, in other areas of physics (such as plasma physics and astrophysics).

He developed a theory of weak turbulence on the beta plane, which explains a number of important features of the nonlinear self-organization of large-scale motions in the ocean and atmosphere. His study of planetary waves in a stratified ocean of variable depth is an important contribution to the theory of small oscillations in geophysical systems.

In recent years, he has been actively working on the problem of describing the evolution of intense localized vortices on a rotating Earth (rings in the ocean, typhoons in the atmosphere). His theory of singular and distributed vortices on the beta plane not only explains the qualitative laws of this evolution, but also allows one to quantitatively calculate the vortex trajectory, the field of Rossby waves emitted by the vortex, and other important characteristics.

In recent years, he continues to actively work on the problems of generation and dynamics of synoptic oceanic movements.

Repeatedly presented reports at all-Union and international congresses, conferences and symposia, as well as at seminars of leading scientific institutions of the USA, Australia, France and Israel.

Since 1980 conducts extensive pedagogical work at the Moscow Institute of Physics and Technology, where he holds the post of assistant professor at the Department of Ocean Thermal Hydromechanics.

He is the author of over 100 published scientific papers.