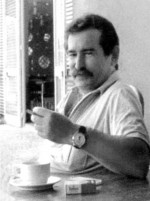 physicist, geologist, DSc (Geological and mineralogical sciences) (1981),
from 1992 to 1994 - Director of the Institute of Oceanology

In 1966 he graduated from Leningrad State University with a degree in physics (nuclear reactions). Since 1971, he worked at the Institute of Oceanology as a graduate student and a junior research fellow, and since 1976, a senior research fellow. In 1992, he entered the competition for the post of director of the Institute, which he held until 1994.

He was the specialist in the field of modern geology and paleogeodynamics, primarily those sections that are associated with the calculation and analysis of the movements of lithospheric plates.

His main scientific interests were focused on the development of a methodology for paleogeodynamic constructions, on its application to individual regions and for the entire Earth as a whole. Together with L.P. Zonenshayn he created a unique in its entirety series of 24 global paleogeodynamic reconstructions (maps), covering the time interval from 160 million years ago to the present.

In 1981 he defended his doctoral dissertation "Cenozoic plate tectonics of the Arctic, northeast and Inner Asia and global paleogeodynamic reconstructions." Member of many ocean expeditions.
The author of more than 50 scientific papers and co-author of a number of monographs.

back to top
You are here:HOME/Persons/Savostin Leonid Alekseevich (1944-2004)