MUSEUM OF HISTORY
OF THE IO RAS

P.P.Shirshov Institute of Oceanology of the Russian Academy of Sciences is the oldest and largest Russian research center in the field of oceanology.

The Institute was established on January 31, 1946 by a decree of the Presidium of the USSR Academy of Sciences, which prescribed "conducting research on the ocean and the seas based on the idea of the unity of physical, chemical, biological and geological processes occurring in the seas and oceans." The resolution was signed by the President of the USSR Academy of Sciences S.I. Vavilov and prepared by academician P.P. Shirshov and professor V.G. Bogorov.

The first director of the Institute of Oceanology was P.P. Shirshov. Together with him, the famous scientists L.A. Zenkevich, V.G. Bogorov, S.V. Bruevich, A.D. Dobrovolsky, P.L. Bezrukov, I.D. Papanin, V.B.Shtokman and others took an active part in the creation and establishment of the new scientific center. 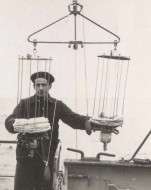 In 1949, the Institute received at its disposal the first research vessel Vityaz with a displacement of 5.7 thousand tons. It was a ship specially converted for oceanological work, the name of which is associated with a series of scientific discoveries.

SRV "Vityaz" became a symbol of the Institute. Over 30 years of work on the ship, 65 voyages were carried out, glorifying domestic science. Currently, SRV "Vityaz" is the main exhibit of the Museum of the World Ocean in Kaliningrad.

Brief VideoEncyclopedia of the IO RAS