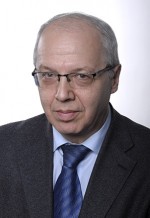 Professor of the Chair of Geology and Mineral Exploration of the Institute of Natural Resources of Tomsk Polytechnic University.

In 1972, he graduated from the Department of Mechanics and mathematics of Moscow State University. In the same year, he entered the graduate school of Shiroshov Institute of Oceanology of Russian Academy of Sciences, from which he graduated in 1975 with a PhD Thesis on "Geomechanical model of subduction zones".

In 1985, he defended his DSc Thesis "the Nature of geodynamic processes, geophysical fields, and seismicity in spreading and subduction zones".

Since 1972, consistently passed the stage of Junior, Senior, leading, Chief Research Officer, becoming Deputy Director of the Shiroshov Institute of Oceanology of Russian Academy of Sciences for geological direction in 1993, Since 1994 - Head of Laboratory of geodynamics, geo-resources, geohazard and geo.

L.I. Lobkovsky's main research interests are related to the application of continuum mechanics methods to solving problems of geodynamics, marine Geology and Geophysics, and Oceanology. He developed quantitative geodynamic models of the processes of spreading and subduction of the ocean lithosphere, cycles of the strongest tsunamigenic earthquakes, collisions of lithospheric plates, evolution of passive continental margins, sinking of the basement of sedimentary basins; proposed the concept of two-tier plate tectonics; predicted the strongest tsunamigenic earthquakes in the Central Kuril Islands in 2006–2007. The processes of propagation of the corresponding tsunami waves in the Pacific Ocean and the sea of Okhotsk are modeled; a thermochemical model of mantle convection is proposed, which is used for numerical modeling of the global evolution of the Earth throughout its history.

Organized an innovative direction for the development of marine geological and geophysical research using high-resolution data acquisition technologies for the development of hydrocarbon resources on the Russian shelf. He created the Caspian branch of the IO RAS in Astrakhan, on the basis of which complex geological, geophysical and environmental studies of the Caspian Sea are conducted and scientific support for large oil and gas projects is provided. In particular, for the first time in Russia, a system of continuous geodynamic monitoring of oil and gas production on the shelf at the Yu. Korchagina NK "LUKOIL" in the Northern Caspian Sea with the help of bottom stations connected by cables to the platform.

International recognition of his work resulted in his election as a full member of the European Academy in 2000.

Author of more than 250 scientific papers and 10 monographs. The book "Geodynamics of spreading zones, subduction and two-tiered plate tectonics" (1988) was widely recognized. The largest generalizing work is the monograph (written jointly with V.E. Khain and A.M. Nikishin) "Modern problems of geotectonics and geodynamics" (2004).

Chekhov V. D., Lobkovsky L. I., Sheremet O. G., Shipilov E. V., Kononov M. V. The Shear system in the earth's crust of the Bering and Chukchi seas – a relic of the boundary between the Eurasian and North American lithospheric plates. In the collection Tectonics and geodynamics of the continental and oceanic lithosphere: General and regional aspects, series Proceedings of the XLVII Tectonic meeting, place of publication GEOS Moscow, 2015, Vol. 2, pp. 252-256.