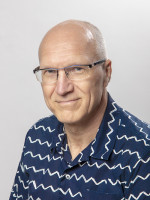 In 1986 he graduated from the Leningrad State University, Faculty of Chemistry. Since 1987 he worked at the Polar Research Institute of Marine Fisheries and Oceanography named after V.I. N. M. Knipovich (PINRO, Murmansk), including since 2005 - in the position of deputy director for research. From 2021 to the present, he has been working at the Shirshov Institute of Oceanology Russian Academy of Science (IO RAS, Moscow).

Research areas: chemical, physical and fishery oceanography, hydrobiology, marine ecology, biotechnology. The main research topics: the analysis of long-term changes in the chemical regime of water masses in conjunction with changes in the climate and ecosystem of the Arctic seas, the development of methods for predicting changes in the commercial populations based on environmental data.

Since 2004, he headed scientific departments (fishery oceanography, biochemistry and technology, applied ecology and toxicology, commercial hydroacoustics and underwater research, marine mammals, commercial fishing, trophology), the department of computer and information technologies at PINRO, the Center for Marine Research Expeditions and the Atlantic Base of Research Fleet at the IO RAS.

Since 2006, he has managed projects for expeditionary, environmental and hydrometeorological support of economic activities in the Arctic seas, in accordance with the ISO 9001 quality management system standard.

Since 2005, he has managed international projects: “Understanding the mechanisms of restoring stocks of commercial populations”, “Report on the current state of the Barents Sea ecosystem”, “Ecosystem monitoring of the Barents Sea”, “Study of circulation in the strait between the Novaya Zemlya and Franz Josef Land archipelagoes (BIAC)”,“Coastal ecology”.

Work experience in Russian and international commissions: Russian Federation National Oceanographic Commission; the International Council for the Exploration of the Seas (ICES) Working Groups on ocean hydrography, on arctic fisheries, on the study of the processes of recruitment of commercial populations; the Joint Norwegian-Russian Commission on Environmental Protection; Expert Council of the Russian Foundation for Basic Research; Scientific Expert Council of the Russian State Commission for the Development of the Arctic.

back to top
You are here:HOME/Persons/Oleg Titov