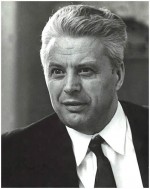 Born in Moscow in the family of an associate professor at the Moscow Pedagogical Institute.

In 1938 he entered the Faculty of Mechanics and Mathematics of Moscow State University, from which he graduated in December 1942 and was immediately admitted to graduate school.

In 1943 he was drafted into the army and sent to the courses of military forecasters at the Higher Hydrometeorological Institute of the Red Army. Received the rank of junior lieutenant, was sent to the 3rd Baltic Front, where he served as the commander of the front-line weather station during the entire campaign from the liberation of Pskov to the liberation of Riga.

Further scientific specialization was determined in the postgraduate study of the Research Institute of Mathematics of Moscow State University, where, under the leadership of Academician A.N. Kolmogorov, in the period from 1946 to 1949, he prepared and defended his Ph.D. thesis on the theory of atmospheric turbulence. In 1951 he transferred to the Geophysical Institute of the USSR Academy of Sciences in the Department of Atmospheric Physics, which was later transformed into the Institute of Atmospheric Physics, where he worked as a senior researcher, head of a department, and a scientific consultant. In 1956 he defended his doctoral dissertation on the theory of turbulent diffusion.

Since 1965 - Director of the Institute of Oceanology of the USSR Academy of Sciences.

The breadth of scientific interests and the encyclopedic nature of knowledge have found useful application in the post of director of the Institute of Oceanology. With his arrival, work on fundamental problems of physics, chemistry, geology, and biology of the ocean was intensified. The works of the Institute have received worldwide recognition, and the Institute itself has become the leading scientific center of the country and the world in the study of the ocean. Thanks to the director's persistence and dedication, the Institute's fleet increased significantly at that time, modern ships were built to replace the Vityaz - the RV Akademik Kurchatov, Dmitry Mendeleev, Akademik Mstislav Keldysh, Professor Shtokman, the new Vityaz, acoustic ships "Akademik Sergei Vavilov" and "Akademik Ioffe", manned submersibles "Paysis" and "Mir" appeared.

Monin delved into all the problems of the Institute's activities - the construction of a building, new ships, the creation of underwater laboratories and manned submersibles; carried out fundamental theoretical research in the physics of the ocean, organizing the implementation of numerical experiments on the general circulation of the atmosphere and ocean and paying great attention to the technique of direct measurements and the creation of new measuring instruments.

He performed fundamental work on weather forecasting, climate theory, numerical modeling of the atmosphere and ocean. An extensive cycle of his works is devoted to the problems of ocean hydrodynamics from the smallest-scale movements (turbulence, microstructure, surface and internal waves) to large-scale (synoptic eddies, meanders, rings, general ocean circulation).

A significant cycle of works is devoted to planetology: hydrodynamic problems of planetary evolution and geomagnetic dynamo, gravitational differentiation of planetary interiors, density convection in the earth's mantle and the motion of the poles.

Until 2007, Andrei Sergeevich continued to work at the Institute of Oceanology of RAS, heading the Laboratory of synoptic processes. He created a scientific school on geophysical hydrodynamics, which was awarded, since 1996, a grant from the President's Program for the Support of Scientific Schools.

He is the author of over 620 published scientific works, including 24 monographs. Almost all of his books have been translated into foreign languages. His great merit as an initiator and scientific leader is the creation of a ten-volume collection "Oceanology" in 1978.