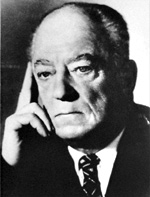 Since 1946, he was the head of the Benthos Laboratory of the Institute of Oceanology, and he headed the complex Oceanographic Expedition of the Institute of Oceanology of the Academy of Sciences for the study of the Far Eastern seas (1949-1952). He was awarded the USSR State Prize (1951) for oceanological research on board the Vityaz. He published over 300 scientific articles, over 10 books and textbooks, over 100 popular articles. For the monograph "Biology of the Seas of the USSR" he was awarded the Lenin Prize (1965). His famous concept of the biological structure of the ocean became the methodological basis of the Institute's many years of biological research on the scale of the entire World Ocean.

He was awarded the Lomonosov Prize of Moscow State University (1954), the Gold Medal of Albert I Prince of Monaco - the highest award of the French Oceanographic Institute, as well as two Orders of Lenin, the Order of the Red Banner of Labor, and the medal "For Valiant Labor."

back to top
You are here:HOME/Persons/Zenkevich Lev Alexandrovich (1889-1970)