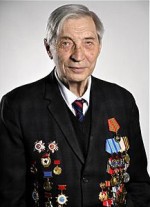 Gleb Borisovich Udintsev (June 19, 1923 - January 14, 2017, Moscow) - Soviet and Russian oceanologist-geomorphologist, Corresponding Member of RAS, DSc (Geographical Sciences), Professor, twice laureate of the USSR State Prize (1969, 1977). Author of over 400 scientific papers, 15 books. Udintsev's name appears under numerous maps, including the "Atlas of the Oceans" of the USSR Navy, the "General Bathymetric Map of the Oceans" by UNESCO, a series of international geological and geophysical atlases of the oceans - Indian, Atlantic, Pacific.

The film "Angel on the Mast", created by the creative team of the IO RAS studio, tells about the front-line youth of the pilot-Guardsman Gleb Udintsev and his work in the expeditions of the first floating institute in the world, the RV Vityaz.

back to top
You are here:HOME/Persons/Udintsev Gleb Borisovich (1927-2017)