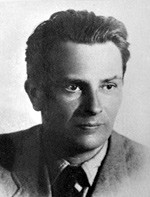 Shtokman Vladimir Borisovich (1909-1968, Moscow) - oceanologist, DSc (Physical and Mathematical sciences) (1944), professor (1947). In 1929 he entered the mathematical department of the Physics and Mathematics Faculty of the First Moscow University, and after graduating from the University of the Hydrometeorological Institute, he continued his studies there. In 1930, he was a trainee, and in 1932, a junior researcher at the State Oceanographic Institute (GOIN). He is entrusted with conducting an expedition to Motovskaya Gulf (Murman), where he collected interesting materials. In 1934, he was sent to Baku to organize there the Laboratory of Physical Oceanology under the Azerbaijan branch of the All-Union Institute of Fisheries and Oceanography (AUIFO).

During this period, his abilities in organizing and conducting original expeditionary work, in using the latest mathematical methods for processing the obtained materials, in introducing completely new ideas for that time about hydrological fields in the sea as random fields, subject to investigation by methods of probability theory, were fully revealed and random functions; in organizing long-term observations to obtain series of data suitable for statistical processing. This kind of work, carried out for the first time on the Caspian Sea, subsequently developed into the principle of "polygon" research in the ocean, which has now become the main method of oceanological field observations.

In 1939 he was invited to the Department of Sea Physics of the Institute of Theoretical Physics of the USSR Academy of Sciences, headed by O. Yu. Schmidt. At the beginning of World War II, he was evacuated to Krasnoyarsk, where he worked for some time at the Arctic Scientific Research Institute (ANII), and in 1943 he transferred to the Laboratory of Oceanology of the USSR Academy of Sciences, which, like the ANII, was evacuated at that time in Krasnoyarsk.

The main scientific interests at the Institute are sea currents and the processes of mixing the water masses of the ocean. He made such fundamental achievements as clarifying the important role of spatial unevenness of the wind field over the oceans in the formation of the horizontal structure of ocean currents, and explaining the countercurrents in the oceans and seas. The introduction of a model of the field of water density made it possible to obtain current velocities at individual horizons using the method of full flows created by him. The method of full flows made it possible to explain the phenomenon of intensification of currents on the western shores of the oceans, i.e. explain the causes of the Gulf Stream, Kuroshio. Very important results were obtained when studying the influence of the bottom topography and the unevenness of the wind field on currents in the seas and oceans. Original results were obtained on the problem of water circulation around the islands. He also owes merit in introducing the method of temperature waves into oceanology to study the processes of vertical exchange. Calculations based on the heat equation made it possible to explain the interesting and largely mysterious features of the distribution of warm Atlantic waters in the Polar basin.

He published more than 100 original studies on ocean dynamics, including the well-known monograph "Equatorial countercurrents in the oceans" (1948).

It can rightfully be considered the founder of most physical laboratories of the IO RAS. During his lifetime, the Department of Physical Oceanography, the Laboratory of Hydrological Processes, and the Laboratory of Marine Meteorology separated from his department into independent subdivisions. He always had many students, some became prominent scientists - successors of the work of their teacher (corresponding members of the RAS R.V. Ozmidov, K.N. Fedorov, doctors of sciences V.M. Kamenkovich, S.A. Kitaygorodsky, M.N. Koshlyakov and others). The created school of domestic ocean physicists successfully lives and develops.

back to top
You are here:HOME/Persons/Shtokman Vladimir Borisovich (1909 -1968)