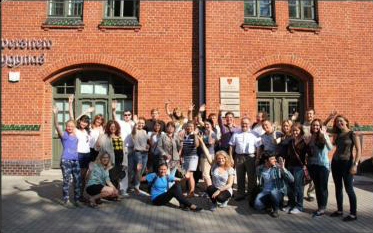 The Department of Ocean Geography was established in 1971 at Kaliningrad State University (now Immanuel Kant Baltic Federal University) on the initiative of the famous polar explorer, Doctor of Geological and Mineralogical Sciences, Professor M.M. Ermolaev.

In April 2013, thanks to a joint initiative of the Kant Baltic Federal University and the Atlantic Branch of the IO RAS (AB IO RAS), the department acquired the status of a basic university department at the academic research institute (cooperation agreement dated 04.04.2013).

The scientific direction "Geography of the ocean" was formed as an independent branch of geographical science in the second half of the twentieth century. Ocean geography deals with the study of the spatial structure and basic physical properties of the ocean as a single natural system, on the one hand, and as part of a more general planetary system - the biosphere - on the other hand. Its tasks include revealing the relationship between the nature of the ocean and the continents, large-scale connections between the oceanosphere and the rest of the elements of the geographic envelope of the Earth, the processes of energy and mass transfer between them, and other phenomena. Ocean geography solves these problems jointly with other sciences, and first of all with oceanology and geoecology. Ocean geography considers the synthesis of knowledge about the ocean as a single natural complex.

The head of the Department of Ocean Geography is DSc (Physical and Mathematical Sciences), Professor, Leading Researcher of the Marine Physics Laboratory of the AB IO RAS Vladimir Alekseevich Gritsenko. His scientific activity is connected with the study of the dynamics of the density-stratified currents of the World Ocean, the variability of its fine structure and the dynamics of a stratified fluid; two effective models of the dynamics of a fluid with a nonuniform density were developed, which were subsequently used in the study of the phenomenon of near-bottom gravity currents in the ocean.

The main goal of the Department of Ocean Geography is the training of highly qualified specialists (masters) in the field of marine environmental management, focused on the coastal zone.

Employees of AB IO RAS carry out scientific supervision of internships, term papers and final qualifying and dissertations of students and graduate students of the department.

In the process of studying in the direction of "Coastal Oceanography" undergraduates acquire the following skills and abilities for activities in the research field:

The areas of professional activity of the masters of the department are:

Postgraduate studies are carried out in the direction of "Earth Sciences" (the focus of the program is "Oceanology"). The training courses were developed by leading oceanologists in Russia and abroad.

Bases of educational and production practices:

For 4.5 years of the existence of the department, 36 bachelors, masters and graduate students of the Kant Baltic Federal University took part in 23 expeditions to the Atlantic Ocean, the Arctic, the Antarctic and the Baltic Sea. Research cruises were carried out on RV "Akademik Mstislav Keldysh", "Professor Shtokman", "Akademik Nikolai Strakhov".

back to top
You are here:HOME/Graduate School/Basic Chairs/Department of Ocean Geography, Immanuel Kant Baltic Federal University