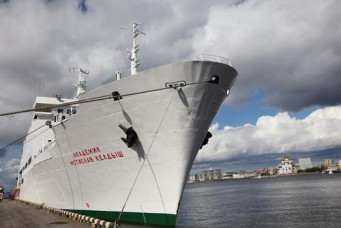 From August 27 to September 25, 2020, the 81st expeditionary voyage of the research vessel "Akademik Mstislav Keldysh" is carried out.
The duration of the voyage is 30 days, the head of the expedition is academician Mikhail Vladimirovich Flint.

The area of work includes the estuarine regions of the Ob and Yenisei, the central regions of the Kara basin, where the surface desalinated "lens" is localized; the continental slope area in the north of the basin; bays of the eastern coast of Novaya Zemlya; Novaya Zemlya depression; the areas adjacent to the Kara Gates Strait from the east - the area where the invasive crab from the Barents Sea penetrates into the basin.

On board of the scientific vessel "Akademik Mstislav Keldysh", which is now in the large Arctic expedition "AMK 81", a seconded correspondent of the newspaper "Argumenty Nedeli", columnist of the Science department, Alexander Chuikov, is working.

The main goals of the expedition:
Assessment of the structural and functional organization and biological productivity of ecosystems in places where the largest accumulated environmental risks are concentrated in the Kara Sea - Novaya Zemlya bays, Novaya Zemlya depression, estuaries of the Ob and Yenisei to identify possible mechanisms of ecosystem response to anthropogenic stress, and the level of their isolation; assessment of the processes of interaction between ecosystems that carry accumulated environmental risks and the adjacent Arctic, forecast of ways and mechanisms of pollution transfer in the event of natural or anthropogenic de-conservation of radioactive waste burial grounds and places of natural accumulation of radioactivity and other contaminants.

Assessment of the state of especially dangerous underwater objects as part of the largest burials of radioactive waste in the bays of the eastern coast of Novaya Zemlya and the Novaya Zemlya depression in the Kara Sea, identification of possible radioactivity leaks and areas of contamination.

Assessment of the formation processes, volumes and mechanisms that determine the configuration of the surface desalinated "lens" that accumulates the largest river runoff in the Arctic and allochthonous matter, including pollution, in specific climatic conditions; assessment of the effect of the surface desalinated "lens" on the structural and functional properties and productivity of the pelagic ecosystem of the Kara basin.

Evaluation of the population dynamics of the predatory invasive species in the Kara Sea - snow crab (opilio), the ways of invasion of the alien species, localization of invasive populations, the impact of the invader on the native benthic ecosystems of the basin and natural biological diversity.

Tweet
back to top
You are here:HOME/ News/81st expeditionary cruise of the RV Akademik Mstislav Keldysh