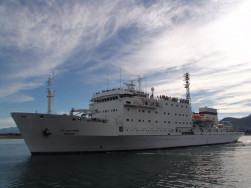 From 19 to 28 August 2020, Kaliningrad will host students, postgraduates and lecturers on board the research vessel "Akademik Ioffe" to participate in the III International School "Coastal Zone of the Sea: Management, Research and Prospects", implemented as part of a unique scientific and educational project by Shirshov Institute of Oceanology of RAS and Kant IKBFU. It is planned to study the state of the marine ecosystem of the Baltic Sea in 10 days. Research work will be carried out not only in the Russian sector of the South-East Baltic, but also in Polish and Swedish waters.

Under the guidance of leading Russian scientists, young researchers will study the features of the bottom topography, along which water exchange takes place between parts of the Baltic, assess the degree of eutrophication of the sea, one of the indicators of which is the well-known "blooming" of water. Also, the scientific program of the voyage provides for the study and mapping of the seabed surface, sampling of bottom sediments in areas of gas anomalies and submerged chemical weapons, hydrophysical sounding of the water column.

A special environmental problem facing scientists on this expedition is associated with the search and identification of man-made objects - sunken ships with unused fuel and unknown cargo. The presence at the bottom of underwater objects losing their tightness can have a negative impact on the biota, and the objects themselves are subject to the complex impact of the marine environment, the study of which is necessary to predict the consequences and search for solutions to minimize environmental risks. The work on the identification of sunken ships is carried out within the framework of the international project BalticRIM, the purpose of which is to record and preserve the maritime cultural heritage, as well as its integration into the planning of activities at sea. 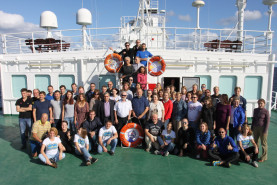 In addition, it is planned to continue the study of ice (iceberg) plowing furrows following the discovery made during the July scientific cruise on the R / V Akademik Nikolai Strakhov, when oceanologists discovered traces of icebergs of the Ice Age. The results obtained will make it possible to reconstruct and clarify the history of the retreat of the Scandinavian glacier during the warming and formation of the modern Baltic Sea.

“The 56th voyage of the Akademik Ioffe will be very unusual, since, in addition to the main scientific tasks, it will host the participants of two scientific and educational events - the School for young people interested in marine sciences and a round table of geologists. To participate in a real sea expedition is a good luck even for young employees of the Institute of Oceanology, what can we say about students who could not even dream of such an adventure. The importance of such “floating universities” is that future specialists do not just work with water or bottom sediment samples, but see how they are taken, and lectures held within the School help to understand why this is done. Taking part in the process, the guys feel that they belong to the “big science” and for many it turns out to be a decisive step in choosing a profession, ”noted the head of the expedition, Marina Ulyanova.

In addition to research, the School program includes lectures, master classes and round tables, which will be conducted by scientists and representatives of leading scientific and educational institutions of Russia and neighboring countries. As a result, young scientists will be able to gain invaluable expeditionary experience, gain new knowledge and acquire skills in working with scientific equipment.

Tweet
back to top
You are here:HOME/ News/Scientists of the Institute of Oceanology will study dangerous objects at the bottom of the Baltic