On November 10, 2020, at a meeting of the Presidium of the Russian Academy of Sciences, the results of the 82nd cruise of the RV Akademik Mstislav Keldysh to the Arctic Ocean, which took place in September-November of this year, were summed up.
Alexander Osadchiev, PhD (Physical and Mathematical Sciences), Senior Researcher at the Shirshov Institute of Oceanology of RAS presented the main results of hydrophysical research during the cruise. The collected data confirm the existence of an abnormally large area of desalination in the Laptev and East Siberian seas. 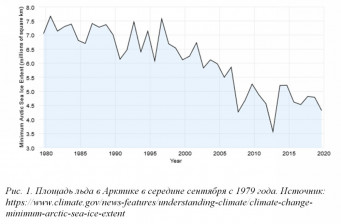 The processes in the Arctic themselves are already under the influence of the ongoing climatic changes. River runoff into the Arctic has increased since the 1980s from 3900 km3 to 4300 km3 per year. The ice area in mid-September in 2019 and 2020 was reduced by almost half compared to the state in the 1980s (Fig. 1). It is important to study these processes, because they are directly related to the freshwater circulation in the Arctic, "Osadchiev said. 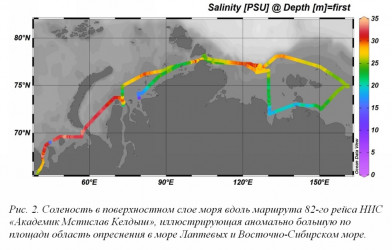 While studying these areas, scientists are faced with an interesting scientific challenge. In the Laptev and East Siberian seas, an abnormally large area of desalination has been observed in recent years. The freshwater runoff into the Kara Sea is twice the volume of the runoff into the Laptev Sea. Despite this, the area of the desalination area in the Laptev and East Siberian seas is 1.5-2 times larger than in the Kara Sea (Fig. 2). Why is this happening?

This year the answer to this question was found. "Two deep estuarine rivers flow into the Kara Sea - the Ob and the Yenisei, respectively, the desalination layer in the Kara Sea is also deep. And into the Laptev Sea and the East Siberian Sea, deltaic rivers, the Lena, the Indigirka, the Kolyma and others, which in fact represent many small in size and shallow rivers. In this regard, the layer of desalination in the Laptev Sea and the East Siberian Sea is thinner, but very large in area. In addition, sea water practically does not flow into the delta channels, unlike estuaries, because of this freshwater runoff The Ob and the Yenisei are experiencing much greater mixing near the source than the flow of the Lena and other delta rivers. The fresher the water in the ocean, the faster it freezes in autumn, this fact is associated with fluctuations in the rate of ice formation in the Eastern Arctic. " 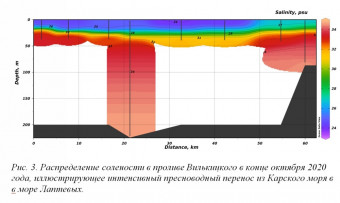 "The second important result: In the Eastern Arctic, two large areas of desalination are formed in summer and autumn. In the spring, this desalination is not. Where does it go? To the north? To the east? Mixes within the shelf? <...> At the end of 2020, we recorded an intense zonal freshwater transport from the Kara Sea to the Laptev Sea through the Vilkitsky Strait (Fig. 3). This transfer potentially affects 25% of the river flow into the Arctic entering the Kara Sea. The salinity of the surface layer in the Vilkitsky Strait was lower than that of the fresh water source - Ob Bay ", - Alexander Osadchiev summed up the results.

Tweet
back to top
You are here:HOME/ News/Report by Alexander Osadchiev at the meeting of the Presidium of the RAS