Senior Researcher of Shirshov Institute of Oceanology of the Russian Academy of Sciences, Alexander Osadchiev became a laureate of the prize in the category "Earth Sciences" for a series of works devoted to the study of the distribution and transformation of river flow in the coastal and shelf zones of the Russian seas. 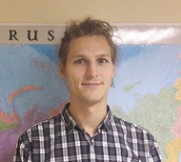 In a series of works by Alexander Osadchiev, fundamentally new ideas about the dynamics of distribution and mixing of river flow into the sea are described. The results of the study of the influence of river flow on the hydrological structure and dynamic processes in the coastal and shelf zones of the Russian seas, including in the densely populated coastal areas of the Russian Black Sea coast and in the shelf waters of the seas of the Russian Arctic, are presented. The results obtained are published in leading international scientific journals and are used in practice to create practical methods for assessing, monitoring and predicting anthropogenic and terrigenous pollution of coastal sea waters entering the sea with river runoff.

Tweet
back to top
You are here:HOME/ News/Scientist of the Institute of Oceanology was awarded the Moscow Government Prize