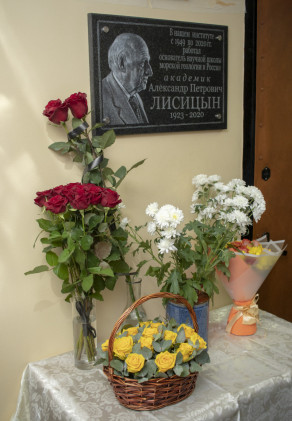 On February 11, 2021, on the anniversary of the death of Academician Aleksandr Petrovich Lisitsyn, a memorial plaque was opened at the Institute of Oceanology near his office by the staff of the Laboratory of Physical and Geological Research, which now bears the name of the academician.

The opening was attended by the relatives of Alexander Petrovich: his son Nikolai Alexandrovich, grandson Alexander Petrovich, cousin Professor Alexander Pavlovich Ettinger and nephew Academician Andrey Borisovich Lisitsyn. Despite the epidemiological situation, many employees of the Institute, colleagues, students of A.P. Lisitsyn gathered on the sixth floor.

The event ended with long applause in memory of Alexander Petrovich.

Tweet
back to top
You are here:HOME/ News/Memorial plaque in honor of Academician A.P. Lisitsyn