On June 19, 2021, the RV Akademik Mstislav Keldysh embarked on the 83rd voyage to carry out the next stage of research under the program “Ecosystems of the Siberian Arctic Seas - 2021”. The head of the expedition is Academician Mikhail Vladimirovich Flint.

This year the expedition will have to solve unique and technically challenging tasks of studying the Kara Sea directly during the period of its liberation from the winter ice "shell". This is fundamentally important for understanding the changes taking place in the Arctic ecosystems under the influence of current climatic processes.

The organizer of the expedition is the Shirshov Institute of Oceanology of RAS. On board the "Akademik Keldysh" there are 75 scientists from 10 institutes of the Academy of Sciences from Moscow, Siberia and the Far East, two Russian universities and the Russian Federal Research Institute Of Fisheries and Oceanography.

Exactly half of the expedition members are scientific youth, postgraduates and students. Daily scientific seminars complement laboratory and field research. 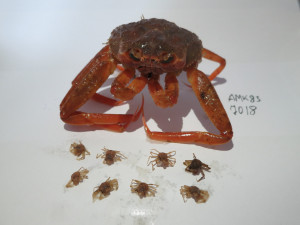 The main scientific tasks of the expedition are to carry out physical, chemical, biological and geochemical studies of the state of the ecosystem of the Kara basin during the period of seasonal ice melting, to assess the state of the population of the invading predatory crab Chionoecetes opilio in the Kara Sea.

Measurements of the gas composition of the atmosphere and collection of aerosols were carried out. Continuous records of the characteristics of the surface layer of the sea were obtained, samples of the surface film were collected for the analysis of oil pollution. Samples of seasonal ice were obtained for chemical, geochemical and biological analyzes.

Data on the population of the invading crab and the impact of the species on benthic ecosystems were obtained. Both traditional accounting methods and underwater video surveillance were used.

back to top
You are here:HOME/ News/83rd voyage of the RV "Akademik Mstislav Keldysh"