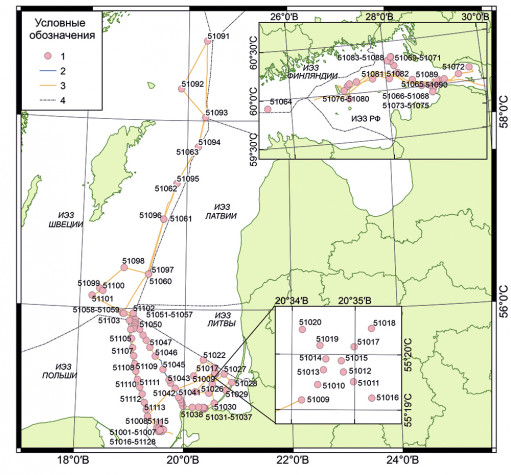 From June 30 to July 14, 2021, the next voyage of one of the flagships of the Russian scientific fleet - the vessel "Akademik Sergei Vavilov", carried out by the Shirshov Institute of Oceanology of RAS (IO RAS). All tasks stipulated by the voyage program were completed.

The route of the expedition passed through the entire Baltic - from the southeastern part through the Central Baltic to the Gulf of Finland. The studies were carried out not only in Russian waters, but also in Finnish and Swedish waters, which is extremely important for monitoring the state of the Baltic ecosystem as a whole, and not its individual basins, because nature knows no boundaries.

Among the tasks facing the oceanographers are monitoring of zones of lack of oxygen and hydrogen sulfide contamination, which are dangerous for most marine life; assessment of the degree of eutrophication of the sea, one of the indicators of which is the well-known water bloom; study of bottom sediments saturated with methane. A special place among the tasks was taken by a comprehensive survey of the sea area, which was chosen as the offshore site of the Carboniferous polygon (there are seven of them in Russia), since there are high rates of photosynthesis - the process of absorption of carbon dioxide with the release of oxygen.

The IO RAS vessel again acted as a mobile student campus, where students took an intensive course devoted to studying the state of the Baltic Sea ecosystem and issues of marine nature management. Particular attention was paid to measurements (with the help of a small size fleet of the Institute of Oceanology of the Russian Academy of Sciences) at the offshore site of the Rosyanka carbon testing ground of the Kant IKBFU, located in the Gdansk depression. The obtained results on the primary production, the content of dissolved gases, the structure of the benthic community and the types of bottom sediments are the basis for further studies at the offshore site.

For the third year in a row, simultaneously with the scientific voyage, the International Summer School "Sea Coastal Zone: Management, Research and Prospects" is being held on board. The organizers of the School are Kant IKBFU and the Atlantic Branch of the IO RAS. This year, the School was held as part of the implementation of the plan of the main events for the Year of Science and Technology in the Russian Federation in 2021.

It is the combination of a scientific expedition with lectures, master classes for young scientists and students (TTR “Training thorough research” methodology) that contributes to the development of a direction that is jointly promoted by the IO RAS and Kant IKBFU.

34 students (undergraduate and graduate students, graduate students and young scientists) from 15 universities and research organizations took part in the work of the School. Lectures and master classes were conducted by 22 leading specialists from various scientific, educational and industrial companies.

Students and graduate students gained valuable expeditionary experience, learned how to prepare a scientific sea expedition, how to plan conflict-free activities at sea, and also talked about their research and discussed directions for further scientific work with leading Russian scientists.

back to top
You are here:HOME/ News/51 voyage of the RV Akademik Sergey Vavilov to the Baltic Sea have been successfully completed