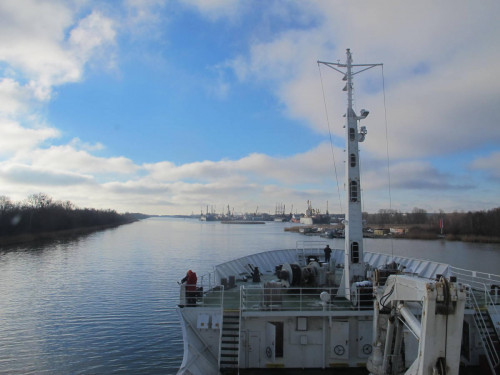 On December 7, 2021, the 87th voyage of the R / V Akademik Mstislav Keldysh began, lasting 120 days, with the departure and completion of the expedition in the port of Kaliningrad.

The head of the expedition, DSc Evgeny Morozov. The vessel is sailing to the Weddell Sea to carry out research on the Antarctic program. There are 53 scientific personnel (from 10 organizations) and 39 crew members onboard.

The research is carried out within the framework of the work on the state assignment of the Shirshov Institute of Oceanology of the Russian Academy of Sciences "Assessment of the current state of natural complexes of the Atlantic sector of the Southern Ocean and their variability of different periods (ecosystems, bioproductivity, hydrophysics, hydro- and geochemistry".

The main goal of the research is to assess current climatic trends (on a scale of a decade) and assess the impact of these trends on the natural complexes of the Southern Ocean, current biological productivity, structure and spatial organization of the Antarctic pelagic and benthic ecosystems. Assessment of the potential for the removal of biological resources and other forms of anthropogenic impact on the basis of materials obtained in complex sea expeditions.

A necessary component of research is the study of the physical environment of the Southern Ocean, which includes a wide range of tasks: the study of the structure of currents, fronts, eddies, and thermohaline characteristics, water masses of the Southern Ocean. A special role in this is played by the study of the Antarctic Circumpolar Current, which links together the entire circulation system of the World Ocean, which significantly determines the dynamics and biological characteristics of the waters of the Southern Ocean. In this regard, it is important to study water exchange in Antarctica between the Atlantic and Pacific oceans both in the upper layer and in the abyssal of the ocean, and to assess its impact on the climate and biology of the Southern Ocean and the World Ocean in general, and to study the distribution and properties of the Antarctic bottom water in the Atlantic, which from the regions of its formation in Antarctica carries in the World Ocean a signal of the Earth's climate change on a scale of decades, and changes in its temperature and salinity affect the climatic characteristics of the ocean up to the latitudes of Europe.

Tweet
back to top
You are here:HOME/ News/87th voyage of the RV Akademik Mstislav Keldysh