The 61st voyage of the Akademik Ioffe to the Baltic Sea. Preliminary results

The RV Akademik Ioffe has returned from the 61st scientific voyage across the Baltic Sea, which lasted 15 days from June 28 to July 12. Traditionally, the main task of oceanologists has been to study the state of the marine environment, which is not only subject to intensive human use, but also responds to regional climate changes. In order to give a reliable assessment of the ongoing changes, it is important to apply an integrated approach, so scientists from different fields worked on the expedition - hydrologists, geologists, biologists, ecologists. In two weeks, 2275 nautical miles were covered, more than 3000 samples of water, bottom sediments, and biota were taken at 117 oceanological stations. Partially, the samples were processed on board the ship, so it is already possible to draw preliminary scientific conclusions. However, most of the material was sent to the coastal laboratories of scientific and educational organizations participating in the expedition, and these are 16 universities, scientific institutes, the Museum of the World Ocean and regional branches of the Russian Geological and Russian Geographical Societies. 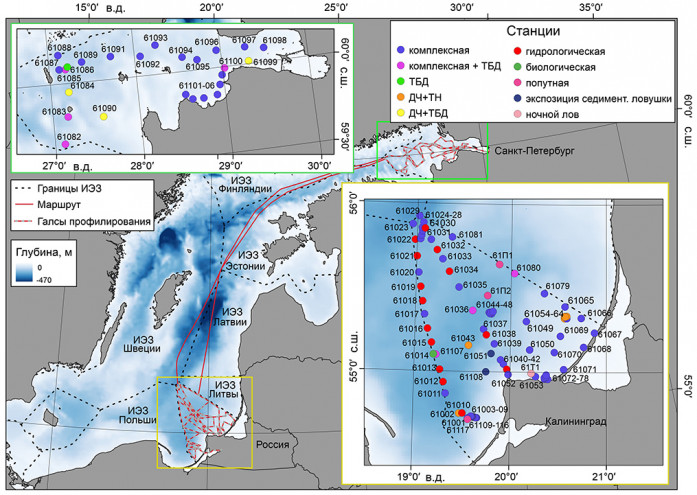 Of the 68 members of the expedition, 40 people are under 35 years old - this is the age determined by the Ministry of Education and Science for a young scientist. So many young people were able to try themselves as a real oceanologist due to the fact that the 5th International Summer School "Coastal zone of the sea: research, management and prospects" of the Kant Baltic Federal University together with the Atlantic Branch of IO RAS was held as part of the expedition. Students of the BFU, Moscow State University, Moscow Institute of Physics and Technology, St. Petersburg State University, KSTU, SevGU began to undergo selection and preparation for the voyage from February, choosing the direction of research in advance, reading scientific literature and consulting with curators. It is this approach that has become the most effective within the concept of "Floating University" or "Learning through Research". 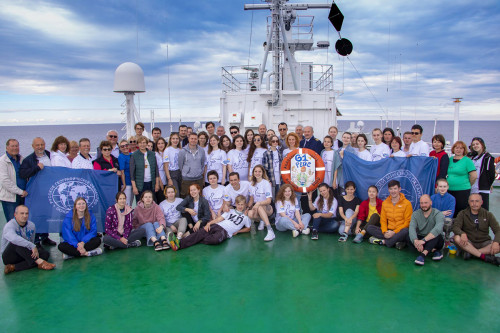 Participants of the 61st voyage of the RV Akademik Ioffe

On the voyage, the students of the School went through the entire research cycle - from sampling to preparing a report for a conference on the results obtained. A visit to St. Petersburg, a digital detox, four meals a day, a table tennis tournament and swimming in a pool with outboard water collected along the route of the ship, previously studied by phytoplanktonologists for "blooming", were pleasant bonuses.

Tweet
back to top
You are here:HOME/ News/The 61st voyage of the Akademik Ioffe to the Baltic Sea. Preliminary results