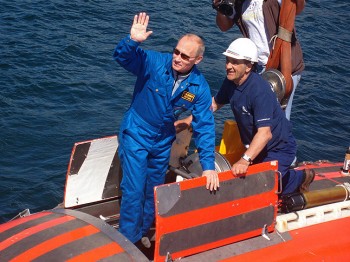 The Chairman of the Government of the Russian Federation, Vladimir Putin, who is on a working trip to the Siberian Federal District, made a descent on the deep sea manned submersible "Mir" to the bottom of Lake Baikal. Before the dive, Vladimir Putin met the "Mir" expedition on Baikal, which conducts scientific research on the special-purpose vessel "Metropol", which is two kilometers from the coast.

The director of the Institute of Oceanology Robert Nigmatulin told the prime minister about the history of diving, as well as about the work performed during this time. He noted that "at the bottom of the lake there are places from which oil flows out." Sometimes it appears as spots on the surface of the lake, however, "this is a normal phenomenon, and Baikal digests these spots safely," said R.Nigmatulin.

“Baikal’s industrial activity,” according to the scientist, “did not cause serious damage. Baikal cleans itself”. “And the Baikal PPM?” the prime minister asked. "Of course, there is a local impact, but in order to harm, there is no such thing," the director explained.

He also spoke about the manifestation of gas hydrates, which was discovered during this expedition. R. Nigmatulin noted that gas hydrates consist of water and methane - like sparkling water, only instead of carbon dioxide - methane, and are a piece of ice that can be set on fire. “There are a lot of them at the bottom, but how to mine? - Super-Nobel result: mining is technically dangerous - it is a strong greenhouse gas. How to develop it is a matter of the future,” said the scientist. He suggested that the prime minister hold a piece of gas hydrate raised from the bottom. “Not so many people on Earth held gas hydrates in their hands,” R. Nigmatulin noted.

Then Vladimir Putin, dressed in special clothes - a dark blue warm suit, on which the name of the prime minister was embroidered, climbed into the apparatus, after which the hatch of the "Mir" was battened down. Together with V.Putin, the immersion in the triple "Mir" was carried out by the head of the laboratory of the scientific exploitation of deep sea manned submersibles of the Institute of Oceanology of the Russian Academy of Sciences Anatoly Sagalevich and the pilot Viktor Nishcheta. Before the dive, Vladimir Putin signed in the dive log, putting a signature in front of his last name, and also signed a glass, which also follows the "Mir" tradition of the expedition in a package, which is tied outside the vehicle. "Hello Baikal," the prime minister wrote, putting the signature and the date.

When the deep sea submersible "Mir-1" was located at the deepest point of the southern part of Baikal - 1395 m, Vladimir Putin contacted journalists on a hydrophone. "The dive is excellent, there is a wonderful view behind the porthole," said the Head of Government. "The bottom of Baikal is visible, it is very clean and beautiful," he added. However, as Vladimir Putin noted, he was somewhat surprised that the water in the lake turned out to be opaque. "The water, of course, is clean from an environmental point of view, but this is essentially plankton soup, as I called it," the prime minister explained.

According to the portal of the Government of the Russian Federation http://www.government.ru

View the embedded image gallery online at:
https://ocean.ru/en/index.php/novosti-instituta/213-v-v-putin-na-bajkale#sigProId91315f3884
back to top
You are here:HOME/ News/V.V. Putin on Baikal