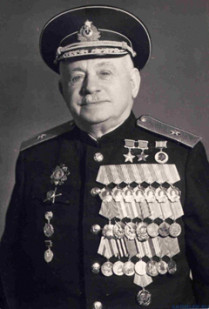 Ivan D. Papanin (26.11.1894 Sevastopol – 30.01.1986, Moscow), - Soviet Arctic explorer, DrSc (1938), Rear Admiral (1943), twice Hero of the Soviet Union (1937, 1940). Ivan Papanin was born in Sevastopol, in the family of a sailor of the Russian Imperial Navy, participated in the Civil War on the side of the Soviet Government. In the 1932-1933 he was the head of the Polar Station "Tikhaya Bay" on Franz Josef Land, and in 1934–1935 of Station at Cape Chelyuskin. In the 1937–1938 he led the world's first drifting high-latitude North Pole Station together with E.T. Krenkel, E.K. Fedorov and P.P. Shirshov. The scientific results obtained in a unique drift were presented to the General Meeting of the USSR Academy of Sciences on March 6, 1938 and were highly appreciated by academician society.

They made an invaluable contribution to the study of the Central Arctic: they proved the absence of land for 2,500 km, found more than 4 km of ocean depth in the region of the pole and a number of ocean bottom rises, refuted the opinion of the lifelessness of the polar region, and confirmed the existence of a warm deep layer of Atlantic water discovered by F. Nansen.

After the drift, Papanin headed the Main Directorate of the Northern Sea Route (1939–1946). In 1941 he was appointed Commissioner of the State Defense Committee for Transportations on the White Sea. 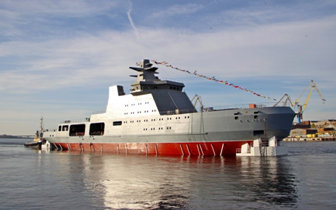 In his honor, on the occasion of the 125th anniversary, on October 25, 2019, the unique scientific military ship “Ivan Papanin”, 110 meters long and seven-story high, was launched in St. Petersburg. Like the famous polar explorer, one of the pioneers of the Arctic, vessel will also be the first, since such icebreakers have not yet been built in Russia, because this is not just an icebreaker, but also a tugboat and a patrol ship. The icebreaker "Ivan Papanin" is designed to perform various civilian and defense tasks: navigate ships, transport cargo, participate in rescue operations and scientific research, while the vessel is a warship and a formidable border guard who can repulse any troublemakers in the North. It is characterized by high reliability, redundancy of the main engines; it uses an electric propulsion system, fixed-pitch propellers, so that the system operates reliably and for a long time. In addition, the ship is equipped with modern communications and navigation. Place of work - Arctic, which I.D. Papanin devoted all of himself. The area is not limited. Autonomy of swimming is 60 days. The ship is able to cope with two-meter ice.

Tweet
back to top
You are here:HOME/ News/Ivan Dmitrievich Papanin - 125 years