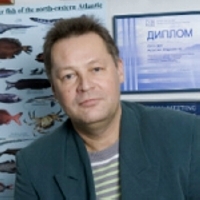 Orlov Alexey Markovich in January 2021 moved from VNIRO to the Institute of Oceanology of RAS to the position of the head of the Laboratory of Ocean Ichthyofauna. He worked at VNIRO for about 35 years, having worked his way up from an engineer to the head of a laboratory and a chief researcher.

In 1982 he graduated from the Fisheries Faculty of the Astrakhan Technical Institute of the Fishing Industry and Economy (now the Astrakhan State Technical University), specializing in Ichthyology and Fish Farming.

He is an expert in benthic fishes of temperate and polar regions of the Northern Hemisphere, as well as in deep-sea ichthyofauna (fishes of the continental slope, meso- and bathypelagic and seamounts). He is the Doctor of Biological Sciences since 2004. Author of over 200 publications in peer-reviewed journals (137 in Scopus and 91 in WoS).

In 1999 he was awarded the R.E. Forster as co-author of the outstanding scientific publication of the year "The ecology distribution and abundance of midwater fishes of the Subarctic gyres". The American Association for Scientific Progress in 2003 awarded him a one-year membership. The prestigious American encyclopedia "Who's Who in Science and Technology", the British encyclopedia "Cambridge Blue Book" and the Russian "Who is who in Russia" published his brief biographical information. He has a jubilee medal "300 years of the Russian fleet" (1996). Awarded with diplomas of the State Committee of the Russian Federation for Fisheries (2003), the International Biographical Center (Cambridge, Great Britain) as the world's leading scientist in the field of ichthyological and fisheries research in 2012.

Member of numerous sea expeditions, the total duration of his stay at sea is about 6 years.