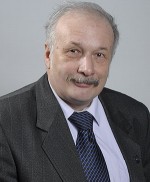 Hydrochemist, doctor of geographical Sciences (2009), since 2000 – head of the Laboratory of biohydrochemistry.

In 1978 he graduated from the Geographical faculty of Moscow state University on a speciality "Oceanology". The thesis devoted to the sources of hydrogen sulfide contamination of the Black Sea, was defended under the guidance of the famous geochemist, Professor K.K.Zelenova. After graduating from MSU he worked for some time at the Institute of water problems, USSR Academy of Sciences.

Since 1980 he has been working at the Institute of Oceanology, first as a senior engineer, then as a junior researcher, as a research assistant, as a senior research fellow, and since 2000 as head of the Laboratory of biohydrochemistry.

During his work he participated in many ocean scientific research trips as a research officer, commander of the detachment, deputy and chief of the expedition. A number of years he participated in the work of the working group on CO2 at the Intergovernmental Oceanographic Commission.

His basic direction of scientific activity is a carbonate system of natural waters, its spatial and temporal variability of various scales, the role of the ocean in the global carbon balance and absorbing manmade carbon dioxide.

He first compiled the monthly average distribution maps of total inorganic carbon and carbon dioxide for the Pacific and Atlantic Oceans, calculated the biological and physical components of the seasonal variability of the carbonate system for the surface waters of the World Ocean.

Some of these materials formed the basis of his PhD thesis devoted to the peculiarities of seasonal variability of the carbonate system of the waters of the Pacific ocean (1988).

Recently, much attention is paid to studying of peculiarities of the hydrochemical regime of the Arctic basin and the role of the rivers in its formation. He supervised two coastal expeditions to the mouth of the river. Ob, as the commander of the detachment worked in the Kara and the Barents Seas.

Together with O.G.Sorokhtin he developed a model for the evolution of the carbonate equilibrium of the ocean and estimates of the rates of carbonate accumulation in the geological history of the Earth.

Annually, he conducts classes with students of the Department of Oceanology of the faculty of geography of Moscow state University on "Dissolved gases and the carbonate system of the waters of the World ocean". He has supervised 1 PhD thesis and several master theses.

He is the author of 55 scientific publications and a large number of popular scientific articles, including in the Great Russian encyclopedia, Encyclopedia for children (publishing house "ROSMEN") and the journal "Nature".