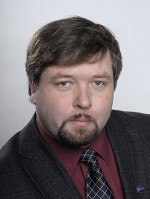 DSc on Geographical Sciences, Corresponding Member of RAS, Head of Laboratory of Ocean Interaction with the Land Waters and Anthropogenic Processes, Deputy Director for Scientific and Organizational work of the Shirshov Institute of Oceanology of Russian Academy of Sciences.

In 1989, he graduated from the Physics Department of Lomonosov Moscow State University.

In 1992, he completed Postgraduate Studies at the Zubov State Oceanographic Institute.

After graduation he defended a thesis for PhD of physico-mathematical Sciences on "the Daily cycle of thermal and mechanical interaction of ocean and atmosphere".

In 2000, he defended his DSc dissertation on "a Wide shelf under the influence of intense continental runoff".

Since 1992, he worked at the Zubov State Oceanographic Institute.

Since 1998, he has been working at the Shirshov Institute of Oceanology of Russian Academy of Sciences, where he successively held the positions of Senior Researcher, Leading Researcher, Head of the laboratory

Since 2006 – Deputy Director of Physics Department  Shirshov Institute of Oceanology of Russian Academy of Sciences.

His Research interests are related to the physics of ocean interaction with freshwater continental runoff, as well as various forms of anthropogenic impacts on marine systems.

Author of the monograph " physical Oceanography of the dying Aral Sea "(2005) and more than 80 scientific articles, as well as a number of popular scientific publications.

Zavyalov P. O. Some questions of Oceanology through the eyes of a physicist. Proceedings of the Ufa scientific center of the Russian Academy of Sciences, 2020, No. 2, pp. 107-109.

Nemirovskaya I. A., Zavyalov P. O., Konovalov B. V., Khramtsova A.V. Content and composition of hydrocarbons in water and precipitation in the Kerch Strait area. Reports of the Russian Academy of Sciences. earth science, 2020, Vol. 492, No. 1, pp. 118-123.

Nemirovskaya I. A., Konovalov B. V., Zavyalov P. O., Onegina V. D., Khalikov I. S. Oil Pollution in the Russian sector of the Black sea. Geology of the seas and oceans. Proceedings of the XXIII International scientific conference (School) on marine Geology, 2019, pp. 70-74.

- member of the editorial boards of the journals "Oceanology" and " Water resources»,