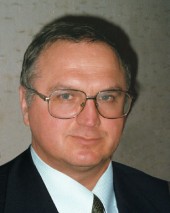 Engineer-physicist, doctor of physico-mathematical Sciences (1993), Professor (1995), head of the Department of thermohydrometric of the ocean MIPT (from 1995 to the present time). Since 2006 – head of Laboratory of sea currents.

In 1973 he graduated from the Faculty of aerophysics and space research of MIPT, specializing in the Department of thermohydrometric of the ocean.

He is working in IO RAS since 1980. Main research areas are: the nonlinear interaction of Rossby waves, the theory of mesoscale eddies of the ocean, the scattering of internal waves by an ensemble of inhomogeneities of hydrophysical fields, the induced electromagnetic field of the ocean of the hydrodynamic origin.

He studied the conditions for the survival of the vortices to their stretching background inhomogeneous flows. He proposed the model describing an ensemble of interacting vortices.

The proposed theories explain some properties observed in the real ocean vortices.

In the last decade, the main direction of research is the near-bottom suspension flow on the slopes of the bottom of the oceans and seas. He and his students developed the theory of formation of catastrophically strong near-bottom currents.

He participated in 10 marine research expeditions on ships of the Institute of Oceanology.