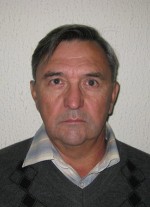 Oceanologist, DSc (Physical and Mathematical Sciences) (1993), chief researcher of the Laboratory of seismology and geodynamics.

In 1970 he graduated from Moscow Institute of physics and technology (Department of physics of the sea). He had worked at the Institute of Oceanology since 1970, having risen from an Intern to a chief researcher.

In 1970-1982, he was engaged in the development of new oceanological instruments to study the ocean. In 1982 he defended his thesis on the application of laser interferometry to the study of hydrophysical processes in the ocean.
From 1985 he had dealed with the problems of application of probabilistic and statistical methods for studying and describing oceanological processes using probability distributions.

By the results of studies in 1993 he defended his doctoral thesis on new methods of examining the distribution structure of ecological communities in the ocean.

At present he engaged in the study of the relationships between variability of hydrophysical processes and anthropogenic impacts on ecological communities in the Caspian sea.

Participated in 17 of ocean and more than 20 marine expeditions.

He is currently a member of the Supreme Ecological Council of the State Duma of the Russian Federation, an expert in ecology in the Department of nature management of the Moscow Government.