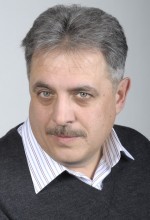 DSc on chemical Sciences, Chief Researcher, Head of the laboratory of Geochemistry, geological direction of the Shirshov Institute of Oceanology of the Russian Academy of Sciences.

In 1981, he graduated from the Department of Geology of Moscow State University with a Degree in Geochemistry.

In 1986, at the Shirshov Institute of Oceanology, he defended his Thesis for the Degree of PhD of geological and mineralogical Sciences on the Geochemistry of metal-bearing sediments of the East Pacific uplift under the supervision of Professor I.I. Volkov.

In 2005, he defended his DSc Thesis on "Geochemistry of rare earth elements in the ocean".

In 1986-1989, he worked as a Junior Researcher at the Institute of experimental Mineralogy of the Russian Academy of Sciences (Chernogolovka, Moscow region). He studied phase relations in systems of solid solutions of tennantite-tetrahedrite and luconite-famatinite, as well as potentiometric studies in sea water.

Since 1989, he has been working at the Shirshov Institute of Oceanology, since 2002-Head of the laboratory of Geochemistry.

In 1985, he and his co-authors published the first Russian paper in the journal "Geochemistry" on the use of synchrotron radiation for the determination of rare earth elements in natural objects by x-ray fluorescence analysis. He was the head of two PhD theses. Member of expeditions in the Black, Caspian, Baltic seas and the Atlantic Ocean. Author of 90 scientific publications and 2 monographs.

Semilova L. S., Dubinin A.V., Rimskaya-Korsakova M. N. Sulfate-chlorine ratio in the Black sea water as a reflection of the process of sulfate reduction. In the collection: Comprehensive research of the World ocean. Materials of the V all-Russian scientific conference of young scientists, 2020, pp. 399-400.