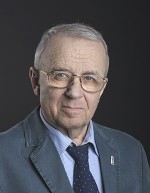 Telemechanical engineer, DSc (Technical Sciences) (1985), professor, since 1979 - head of the Laboratory for the Scientific Operation of deep-sea inhabited vehicles.

In 1965 he graduated from the All-Union Correspondence Energy Institute. The first place of work is the Institute of Automation and Telemechanics (Control Systems) of the Academy of Sciences of the USSR (1959–1965), since 1965 he has been working at the Institute of Oceanology.

He created a new direction - ocean research using deep-sea inhabited vehicles (GOA). He took part in the construction of GOA "Paisys VII" and "Paisys XI". One of the creators of the Russian six-thousanders "Mir-1" and "Mir-2". For nearly thirty years, he has been managing the work with these devices, used for scientific research of the ocean and underwater technical work.

Thanks to the methods created by him, scientific research of the ocean using GOA took on a systemic character. Deep-sea vehicles have acquired the status of unique scientific instruments that allow scientists to conduct direct observations at great depths using the most modern scientific and navigation equipment. Under his leadership, unique deep-water technologies were developed for sealing sunken objects containing radioactive elements, seven expeditions were conducted to the "Komsomolets" nuclear submarine, and one expedition to the "Kursk".

He led a team of submariners for the first time in the world who carried out deep-sea filming, which made it possible to create the famous film "Titanic", films about "Bismarck", the Japanese submarine "I-52" and many others that circumvented screens around the world.

He was awarded the Order of Lenin for the creation of the "Mir-1" and "Mir-2", the Badge of Honor for deep-sea exploration of Lake Baikal, and the Order of Courage for special underwater operations on the "Komsomolets" nuclear submarine. The U.S. Researchers Club awarded him the Thomas Lovel Medal for his significant contribution to conducting deep-sea research in the 20th century. In 2002, he was elected a member of the Academy of Underwater Arts and Sciences of the United States in the Science category, becoming the only Russian scientist among the world's outstanding submariners whose name was placed in the Underwater Glory Hall in Miami.

In 2008 awarded the title of Hero of the Russian Federation for courage and heroism shown in extreme conditions, and the successful conduct of a high-latitude Arctic deep-sea expedition.

In 2012 awarded the title "Laureate of the Prize of the Government of the Russian Federation in the field of science and technology".

The Laboratory he leads is a worldwide recognized team of deep-sea divers that has no analogues. In 2003, the Laboratory staff received the International Compass prize from the US Marine Technology Society.

He has about 300 publications, including 3 personal monographs (one in English) and 10 books co-authored.