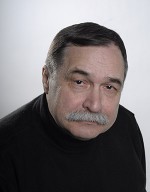 Doctor of physico-mathematical Sciences (2005), head of Laboratory of the tsunami to them.

In 1973 he graduated from the Department of thermohydrometric of the ocean of MIPT. From 1973 to 1986 he worked at the Institute of marine geology and geophysics, Yuzhno-Sakhalinsk, from 1980 to 1986 he worked as a head of the Laboratory of marine physics of the Department of the tsunami IMGG. Since 1986 he has been working in Moscow, first in the Hydrometeorological center then in the State Oceanographic Institute. He has worked in the Institute of Oceanology since 2002.

In 1979 he successfully defended his thesis, and in 2005 – his doctoral thesis "Study of tsunamis: measurement, analysis, and simulation".

He is a specialist in the field of the study of tsunami waves and other wave processes in the ocean, the dynamics of the shelf zone, the time-series analysis. Using high-precision measurements of the bottom hydrostatic pressure in the open ocean, he for the first time in the Soviet Union was able to identify the effects of "capture" and "shelf resonance" on the shelf of the Kuril Islands, to show the existence of regional and radiated waves in this area and their fundamental role in the formation of tsunami waves. It has also been shown that low frequency (meteorological) fluctuations are formed under the strong influence of free and forced shelf waves (topographic Rossby waves).

One of the interesting results obtained by him is the detection in the open ocean the radiation tides.

Especially it should be note the series of his theoretical works devoted to the study of the mechanism of generation of the regional and shelf waves as a result of scattering of large-scale wave formations (such as tides and storm surges) on the irregularities of the terrain.

He actually was the first who began to develop a conceptual framework of "hydrophysical forecast of the tsunami", methods and algorithms for registration and allocation of "danger signals" (tsunami) on the basis of observations of wave motions in the open ocean.

He is one of the best world experts in the field of analysis of instrumental records of tsunami waves. In particular, he, with F.Gonzalez (USA), based on a very thorough and original processing of high-precision measurements of tsunamis in the deep ocean was able to identify the effects of dispersion propagating in the open ocean tsunami waves and to recover the initial tsunami source (1990-1995).

Recent years he has worked in two main directions – research and numerical modeling of tsunami waves caused by underwater landslides, and the study of hydrophysical processes in the shelf zone and in the straits.

In one of his last works, he was able for the first time to analyze the records of the tsunami of the 26 of December 2004 in the Indian ocean by satellite altimetry data and show a significant effect of wave dispersion.

We must highlight the series of three papers published in JGR (1998-2004), devoted to the analysis of large-scale, meso-scale and tidal motions on the shelf of the Beaufort sea in the Arctic ocean. In addition, this study is one of the first, which was revealed experimentally the effect of resonant amplification of internal tides in the area of critical latitudes.

He is the author of about 100 scientific articles published in national and international journals and 2 monographs.