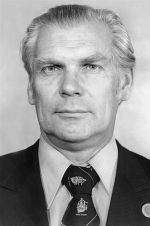 In 1954 he graduated from the Moscow Institute of Chemical Engineering, until December 1956 he worked in a design organization for artillery weapons.

All his further creative scientific activity was associated with the Institute of Oceanology. Over the years of work at the Institute, he has gone from a junior researcher to a leading specialist in the field of methods and technical means of underwater oceanological research. In 1956 he joined the Institute in the Marine Electronics Laboratory. After defending his Ph.D. thesis, he headed the Laboratory of Underwater Research Technology, where, under his leadership and with direct participation, the underwater base-laboratory "Chernomor" was created and successfully operated for ten years on the shelf of the USSR and Bulgaria, which laid the foundation for the development of a new scientific direction - methods and technique of hyperbaric studies.

In 1971, V.S. Yastrebov defended his thesis for the degree of Doctor of Technical Sciences. In 1975 he became Deputy Director of the Institute of Oceanology and headed the Physics and Technology Department. In 1979 he was awarded the title of professor for teaching. In 1987 he was approved (elected) director of the Institute and held this position until 1992.

His most important scientific achievements include the creation of the scientific foundations of the theory of multisystem automated submersibles. Under his leadership, a series of such devices was created and introduced into the practice of oceanological research. The use of towed hardware systems for the first time made it possible to observe the bottom surface for a long time, study its microrelief, and obtain complex information in the form of photographs, sonograms and high-resolution video recordings.

Under his leadership and with his direct participation in the Institute, the technique and technique of deep-sea diving was successfully developed. The first dives were carried out by divers in order to conduct geological research at depths of up to 200 m in the open ocean. The introduction of the diving method into oceanological research on the R / V Vityaz was preceded by a large series of studies at the coastal hyperbaric complex. In 1986, a unique experiment was carried out, which has no analogues in world practice and testifies to the possibility of human work at a density of a neon-oxygen breathing mixture corresponding to a depth of 2000 m.

He developed and repeatedly tested in the expeditions of the Institute a method for the complex application of underwater technical means in the study of the ocean, which made it possible to conduct research in a new way and obtain unique scientific results in the most important sections of oceanology. The application of the method made it possible to raise oceanological research to a qualitatively new level, which provided high resolution in the study of near-bottom objects at great depths, comparable in detail with similar studies on land.

With his direct participation, dozens of expeditionary studies in the ocean using manned underwater vehicles were carried out, which led to new ideas about the relief and structure of the bottom of the World Ocean in tectonically active regions. Studies of the Red Sea Rift have provided direct evidence of the formation of a new oceanic crust. The study of seamounts made it possible to substantiate a tectonic model of the evolution of the Tyrrhenian Sea bottom and propose a new geodynamic model for the formation of thrust crustal structures as a result of their movement along a mechanically weakened serpentinite layer.

He put forward, substantiated and developed a new scientific direction - bottom oceanology. Under his leadership and with his direct participation, work was launched to create models of the bottom high-energy layers of the ocean and the scientific foundations were created for the development of fundamentally new equipment for comprehensive studies of these important phenomena. These works were a complex of physical, geological, technical research and attracted wide attention of domestic and foreign specialists.

For many years he was the organizer and the permanent chairman of the All-Union meeting-school "Technical means and methods of research of the World Ocean", as well as one of the initiators of the regular International Scientific and Technical Conference "Modern Methods and Tools of Oceanological Research" (IOSI). He was a member of the editorial board of the journal "Oceanology".

He is the author of over 200 scientific publications, including 12 monographs on a wide range of issues related to the methods and techniques of research in the ocean. More than 30 applicants defended their PhD theses under his supervision. He holds the title of "Honorary Subsoil Explorer".

back to top
You are here:HOME/Persons/Yastrebov Vyacheslav Semenovich (1932-2005)