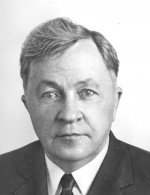 Having not received a formal higher education because of the obstacles of the regime to people of non-proletarian origin, he, after graduating from the Moscow Industrial and Economic College, independently mastered the foundations of geological science and practice, becoming a highly erudite geologist.

The beginning of his career as a drill master, collector, and then a field geologist was associated with the search for phosphorite deposits in the territory of the former USSR. These works culminated in the discovery of the country's largest phosphorite-bearing basin, Karatau, in southern Kazakhstan (1937). The results of the study were summarized in a dissertation, for which, bypassing the candidate, he was awarded the degree of Doctor of Geological and Mineralogical Sciences and awarded the State Prize.

According to the results of these studies, the laws of modern sedimentation, previously unknown to science, were first revealed. It was here that the foundations of the teaching he created about the processes of modern marine sedimentation were laid and the innovative idea of ??comparing the modern precipitation of the marginal seas, island arcs and deep-sea trenches with the sedimentary complexes of the ancient sedimentary belts of the continents was born.

Since 1954, large-scale geological exploration began in the Pacific, and in 1959-1962 - in the Indian Oceans, under his general leadership and with direct participation, which led to the development of the concept of circumcontinental, climatic and vertical zoning of the processes of sedimentogenesis in the ocean. Together with A.P. Lisitsyn, he creates a new classification of ocean sediments (1960), leads the work on compiling maps of ocean bottom sediments and their individual components, similar to which were not abroad. In 1970, under his editorship, the volume “Precipitation in the Pacific Ocean” of the multi-volume monograph “Pacific Ocean” was published.

A large place in his scientific activity was occupied by studies of the mineral resources of the ocean, primarily iron-manganese nodules and phosphorites. The technique of detailed geological studies in small sections (polygons) of the ocean floor, which he proposed and implemented under his leadership on several expeditions on the R / V Vityaz in the Pacific (1968-1970) and Indian (1973) oceans, for the first time revealed a complex picture of the facies variability of deep-sea pelagic sediments and clusters of iron-manganese nodules associated with them.

Published in 1976, the world's first fundamental monograph, Iron-Manganese Nodules of the Pacific, summed up the results of these studies and paved the way for applied geological exploration for this type of potential minerals of the ocean floor. At the same time, he and his staff conducted the first systematic studies of phosphorites in numerous seamounts of the Guyot Islands of the Pacific Ocean, revealing the global scale of phosphate formation of this type.

His last major work was the collective monograph “Sedimentation and Magmatism of the Ocean” in the series “Oceanology” (1979), where he acts as a responsible editor-compiler, as well as the author of several sections.

Member of 11 sea expeditions on the R / V Vityaz. He has been a delegate to many international scientific conferences. He created the national school of marine geologists, under his leadership a whole galaxy of specialists has grown in this young branch of Earth sciences, which includes many candidates and doctors of sciences, corresponding members and full members of the Russian Academy of Sciences.

The list of scientific works includes 178 titles, among which are large chapters in several monographs and collections.

More information about the life and work of an outstanding scientist - geologist and oceanologist can be found in the book of E.M. Bezrukova, A.P. Lisitsyn, I.O. Murdmaa "Panteleimon Leonidovich Bezrukov" (Moscow: Nauka, 1983).