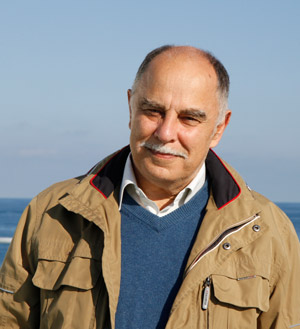 Evgeny Georgievich was born in Moscow in 1946. In 1964, immediately after graduating from high school, he entered the Moscow Institute of Physics and Technology at the Faculty of Aerophysics and Space Research, in 1970 graduated from the Department of Thermal Hydromechanics of S.S. Vojt and was sent to work at the Shirshov Institute of Oceanology of the Academy of Sciences of the USSR.

From his student years he began to participate in the expeditions of the Institute, and in 1969 he took part in a large expedition to the RV Akademik Kurchatov (5th voyage) to the Atlantic. From that moment on, the entire scientific activity of Evgeny Georgievich was inextricably linked with the Institute of Oceanology, in which he began to work in 1970 as an intern-researcher, and from 1972 - as a junior researcher, then a senior and leading researcher. These were the heyday of experimental oceanography. He was fortunate enough to start scientific work under the guidance of a prominent oceanologist, an outstanding scientist, Professor Yuri Aleksandrovich Ivanov.

In 1975 E.G. Morozov defended his PhD thesis (physical and mathematical sciences) on the topic "Investigation of the characteristics of internal gravitational waves in the ocean."

Since 1993 E.G. Morozov is the head of the Laboratory of Hydrological Processes of the IO RAS, which currently has 22 staff members who study a wide range of ocean hydrological processes.

From 2017 to the present - Chief Researcher, Head of the Laboratory of Hydrological Processes, the most experienced experimental physicist at the Institute of Oceanology, a practitioner who has completed more than 50 expeditions with a total duration of the ship's time of about 9 years, participated in most of the expeditions in leadership positions.

The main scientific direction of Evgeny Georgievich's research is the study of internal waves and large-scale circulation of the ocean. He deals with measurements, processing, analysis and interpretation of data, numerical modeling.

In the last decade, he has focused on the study of bottom water flows in the abyssal channels of the Atlantic Ocean. In recent years, E.G. Morozov studies ocean processes in the Arctic, including under the ice and near the front of glaciers sliding into the ocean in Svalbard, which he visits annually.

As a result of many years of research on tidal internal waves in various regions of the World Ocean, he showed that the main source of generation of internal tidal waves is the interaction of a barotropic tide with underwater ridges, in contrast to the previously existing opinion that the main generation occurs on continental slopes. Morozov was the first to build a map of the amplitudes of tidal internal waves of the World Ocean.

His monograph "Oceanic Internal Waves" published in 1985 in Russian, as well as his article "Semidiurnal internal wave global field", published in the journal Deep Sea Research in 1995, are among the most cited. Already at an early stage of his studies of internal waves, in 1980, E.G. Morozov was awarded the USSR Academy of Sciences medal for young scientists.

E.G. Morozov is a member of the editorial boards of the journals "Oceanological Research", "Fundamental and Applied Hydrophysics", Izvestiya RAN series "Physics of the Atmosphere and Ocean", Russian Journal of Earth Sciences. Author of over 220 published articles.

Morozov is active internationally. Being fluent in English, Morozov takes an active part in the preparation of articles on oceanological topics for the English versions of Russian journals.

In 1999 he joined the Executive Committee of the International Association for the Physical Sciences of the Ocean (IAPSO).

In 2015, his term as President of the IAPSO ended and he remained in the rank of Past President. Morozov - Chairman of the Section for Physical Sciences of the Ocean of the National Geophysical Committee of the RAS. For several years he has been a member of the SCOR Ocean Mixing Working Group.

On February 15, 2017, Morozov was awarded the Shirshov medal.

Evgeny Georgievich Morozov celebrates his anniversary full of creative energy. Colleagues, friends, directorate of Shirshov Institute of Oceanology of RAS, the editorial board of the journal Oceanological Research and his students congratulate Yevgeny Georgievich on his 75th birthday, wish him health and well-being, inexhaustible energy for further creative victories for the benefit of marine science, new grandiose experiments and discoveries, and unique research results.

Tweet
back to top
You are here:HOME/ News/Evgeny Georgievich Morozov is 75 YEARS OLD!