Acting Director of the Institute of Oceanology, Alexey Sokov, took part in an expanded meeting of the Russian Engineering Union and the League of Assistance to Defense Enterprises. The meeting was held on February 5 at the Government House of the Russian Federation and was devoted to the issues of diversification of defense industry enterprises in the shipbuilding industry. 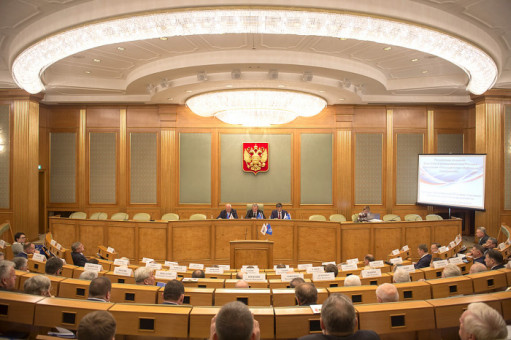 The meeting was chaired by Sergey Chemezov, President of the Engineering Union of Russia, Director General of "Rostec" State Corporation Sergey Chemezov, Yuri Borisov, Deputy Prime Minister, member of the Bureau of the Defense Enterprises Assistance League, Vladimir Gutenev, President of the League of Assistance to Defense Enterprises and First Deputy Chairman of the Russian Engineering Union and State Duma deputies, representatives of the Ministry of Industry and Trade of Russia, heads of leading corporations and defense enterprises.

At present, defense industry enterprises are solving the task set by the president to increase the output of high-tech civilian and dual-use products. Its share should grow to 30% by 2025, and by 2030, make up to half of the total production of defense enterprises. To this end, additional funds will be allocated to defense enterprises, Yuri Borisov said.

A report on the implementation of the import substitution program in shipbuilding was made by Oleg Ryazantsev, Deputy Minister of Industry and Trade. Vice-President of the Russian Engineering Union, President of USC Alexei Rakhmanov spoke about the status and prospects of diversification in the shipbuilding industry.

Shirshov Institute of Oceanology of the Russian Academy of Sciences in the face of Acting Director Alexei Sokov presented his vision of the prospects for building a research fleet. Alexey Sokov noted the urgency of the problem of import substitution and outlined the need for active involvement of Russian machine-building enterprises in the process of creating high-tech vessels operated by IO RAS, due to the small share of domestic instruments in equipping vessels of the Russian Academy of Sciences for integrated study of the World Ocean.

Tweet
back to top
You are here:HOME/ News/Alexey Sokov took part in the discussion of Russian defense industry issues