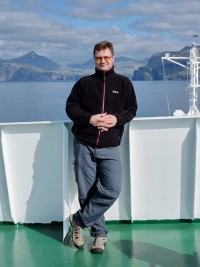 In 2002 he graduated from the Department of Oceanology of the Geographical Faculty of Lomonosov Moscow State University. In 2009 he defended his Ph.D. thesis "Formation of suspended sedimentary matter in the surface waters of the Atlantic Ocean." He has been working at the Institute of Oceanology since 2000. He has published about 60 scientific papers, including 42 articles in peer-reviewed scientific journals and a patent for a utility model.

The regularities of the formation of the quantitative distribution and material composition of suspended sedimentary matter in the atmosphere and the surface (active) layer of the Atlantic Ocean have been studied using satellite and other remote sensing methods while the vessel is under way and their point verification in all natural zones of the Atlantic.
For the first time, maps of the distribution of suspended matter in the surface waters of the Atlantic over the entire ocean are presented on the basis of satellite data, verified by direct measurements of suspended matter while the vessel is under way, and for different seasons.
A detailed study of the amount, composition and properties of water and air suspension was carried out by direct methods while the vessel was underway with the intersection of all natural zones, i.e. with different environmental and climate conditions.

Studies have been carried out to assess the contribution of atmospheric aerosols to the formation of water suspension based on a number of parallel independent methods.
A small sedimentation trap MSL-110 has been developed and put into serial production.
The short-period variability of the sedimentary process in the Black Sea has been studied.
New methods for studying vertical flows of sedimentary matter have been developed, are constantly being improved and are being introduced into research practice on the basis of the AGOS concept of academician A.P. Lisitsyn.