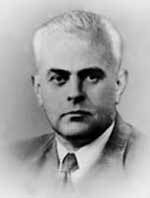 He was born into a working class family. From 1916 to 1920 he studied at a real school, in 1920 he entered the Biological Faculty of the Dnepropetrovsk Institute of National Economy, from 1923 he transferred to the socio-economic department of the same institute, and in 1924 he transferred to the Biological Faculty of the Odessa Institute of National education. In 1928 he combined his studies with work at the Dnepropetrovsk hydrological station. In 1929 he graduated from the Institute and defended his Ph.D. thesis. In the same year he moved to Leningrad and worked as a hydrobiologist in the Botanical Garden and at the biological station in Peterhof. In 1930-1931. - Researcher of the AARI, in 1931-1932. - Member of the expedition to Novaya Zemlya and Franz Josef Land, then from 1932 to 1938. - Expeditions on "Sibiryakov", "Chelyuskin", "Krasin", on the drifting station "North Pole -1".

The film "Peter" is the diploma work of the graduate of the St. Petersburg State University of Cinema and Television Maria Smushkova. The film tells about the fate of the founder of the Institute of Oceanology - academician P.P. Shirshov. Scientists of our Institute took part in the film: Academician A.P. Lisitsyn, corr. G.B. Udintsev, Doctor of Technical Sciences A.M. Sagalevich, Doctor of Biological Sciences I.A. Melnikov, senior researcher A.N. Novigatsky. The film was shot with the direct participation of the IORAN Video Studio. Co-scriptwriter V.M. Marin, operator M. Tolstoy. The work was awarded a red diploma from St. Petersburg State University of Culture and Technology.

His first studies were devoted to the study of rheophilic algae of the Bug and Dnieper, and in 1929 - Tuloma and Neva. In these works, he was one of the first to develop an ecological-geographical approach to the study of the distribution of algae.

In 1930-1931 he studied freshwater algae in little-explored areas of the Arctic. He gave a description and characteristics of the physical and geographical features of water bodies, noted the large role of diatom plankton, desmidia and blue-green algae. An interesting feature of the flora of these places is that it develops in the conditions of a short polar summer, adapted to low temperatures and a long absence of light. In these works, he again drew attention to the effect of the geographical factor in the distribution of microflora, which manifests itself when comparing ecologically equivalent communities of algae in different geographical areas. He worked at a time when the contours of the future science of the distribution of algae, phytogeography, were just beginning to emerge, of which he undoubtedly became one of the founders.

His further work is mainly associated with the study of marine plankton in the high latitudes of the Arctic. In all expeditions, the difficult task of conducting plankton observations along the entire Arctic route fell on his shoulders. The work was carried out continuously and did not stop in difficult ice conditions.

Participation in these expeditions allowed him to identify patterns in the seasonal change in plankton, to develop the idea of ??plankton as an indicator of the sea ice regime. In those years, the question of the reasons for the rapid development of algae at the edge of the ice was widely discussed. Hypotheses were put forward about the stimulation of cell growth by trihydrol molecules, desalination of the surface layers during ice melting. He showed that the main reason for blooming is not the melting of ice, which stimulates the action of any substance, but the opening of the ice cover, which ensures the penetration of solar radiation under the ice. At high latitudes, "blooming" begins after the snow cover melts, when the ice becomes transparent. He determined the duration of "spring flowering" 15-20 days, and the entire growing season 1-1.5 months.

Studying the processes of development of ice and plankton flora, he was the first to pay attention to the peculiarities of vegetation in these latitudes. A specialist in the field of planktonology, he, in addition to the main hydrobiological tasks of research in the Central Arctic Basin, carried out an extensive program of hydrobiological and hydrochemical observations. Various observations were made of the speed and direction of under-ice currents, the hydrochemical composition of water masses, and the composition and distribution of plankton.

Observations of ice drift are interesting: it was possible to register a number of small (1-2 km in diameter) drift loops that eluded astronomical observations, as well as countercurrents arising at a shallow depth after changing the direction of the drift. He created new ideas about the origin of deep Arctic waters, the interaction of ocean water masses, the structure of the Nansen surface layer, the development of life under the ice, and the geomorphology of bottom sediments of the Polar Basin.

The important and responsible state work that fell on his shoulders after returning to the mainland, unfortunately, did not give him the opportunity to devote much time to his own scientific research, but he found time for organizational activities in science.

The Laboratory of Oceanology at the OGGN of the USSR Academy of Sciences, created in January 1941 for the development of complex oceanographic research, was the first institution in the USSR to set the task of a comprehensive study of the World Ocean. The Great Patriotic War disrupted the plans of the Laboratory and its head.

They managed to return to the work of their own Laboratory only after the end of the war. In his memorandum to the Presidium of the USSR Academy of Sciences in 1945 on the state of domestic and foreign oceanology, he drew attention to the need to study all oceans by various oceanological disciplines.

On January 31, 1946, by the decision of the Presidium of the USSR Academy of Sciences, the Laboratory of Oceanology was reorganized into the Institute. The structure of the Institute of Oceanology was approved and P.P. Shirshov was appointed its first director. The primary tasks of the development of oceanology are determined: the development of theoretical problems of oceanology, research of the oceans and seas on the basis of ideas about the unity of the physical, biological and geological processes occurring in the seas and oceans. The first place was given to the study of the Pacific Ocean, which is of great importance for the climate of Siberia, the operation of fish and animal industries in the Far East, for the navigation conditions of the civil and military fleets and the entire development complex of Siberia, the Far East and the islands.

The main areas of scientific activity were:

A fleet is needed to meet these challenges. All the efforts of the staff of the Institute were directed to its organization. Thanks to their efforts and the constant help of P.P. Shirshov, who held the post of Minister of the USSR Fleet in those years, the legendary Vityaz was born. Numerous discoveries in the Pacific and Indian Oceans are associated with the name of this first ocean research vessel in our country. A future school of Soviet oceanographers was created on board, whose work is now recognized throughout the world.

P.P. Shirshov died in the prime of his creative powers at the age of 48. But all his plans were implemented by his collaborators: the multivolume monograph "The Pacific Ocean", awarded the State Prize, and the multivolume monograph "Oceanology" were published. Over the 70 years of its existence, the Institute has written dozens of monographs and thousands of scientific papers devoted to various problems of oceanology, and the Institute of Oceanology has become one of the leading oceanological institutions in the world.

Shirshov's scientific foundation is small. His main research ends after work at the North Pole station. The war, and then work in responsible government posts, the organization of the Institute of Oceanology took away strength and left little time for science. At the same time, its contribution to polar oceanology is undoubtedly significant. His work on phytoplankton of the Arctic seas, made almost 70 years ago, was innovative and are still valid today.