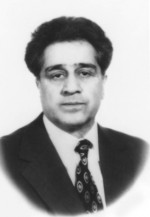 Author and co-author of more than 500 published scientific works, including 9 monographs, devoted to the results of studying the geochemistry of natural gases in the Eastern Ciscaucasia, Western Turkmenistan, Azerbaijan, and the South Caspian trough region.

Awards: Order of the Red Banner of Labor, Order of Friendship of Peoples, medals of the USSR, laureate of the Academician I.M. Gubkin Prize (1989), industry awards